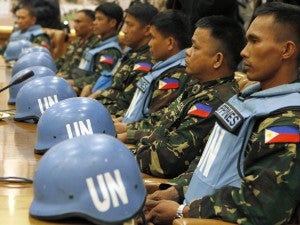 Some of the 21 Filipino United Nations (UN) peacekeepers at the press conference upon their arrival at Jordanian Army Headquarters in Amman Jordan Saturday March, 9, 2012. AP

MANILA, Philippines — Philippine military officials say their country remains committed to deploying troops in UN peacekeeping hotspots despite the brief hostage-taking of 21 Filipino soldiers, who were welcomed back to freedom in Jordan with a traditional military feast.

The unarmed Filipino peacekeepers were abducted on Wednesday in southern Syria near the Israeli-occupied Golan Heights by one of the rebel groups fighting Syrian President Bashar Assad’s regime. After negotiations, they were freed on Saturday on Jordan’s border and taken to a hotel in Amman.

Philippine military spokesman Col. Arnulfo Burgos says the government’s pledge to help in UN peacekeeping missions “is a global commitment” but added security will be improved for the troops’ safety.