Notes from a Loyola Heights Nerdfest 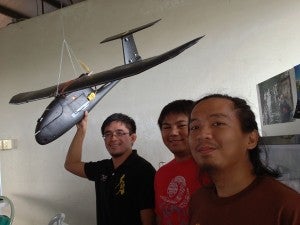 Matthew Cua with the SkyEye team.

MANILA, Philippines — Known mainly as a weapon of war, a drone is re-imagined as a disaster-prevention tool.

Solar panels are engineered to turn rain into safe drinking water for places that don’t have any.

The recent Interlinks exhibit by the Ateneo Innovation Center featured a range of ideas, from a water treatment system dubbed AsTig for Asensong Tubig, a suite of Android-based tablet games to aid a recovering stroke victim to a biometric application for encoding and authenticating individual handwriting styles.

In other words, a Nerdfest.

It’s perhaps similar to other nerdfests held at other universities. But for Greg Tangonan, the Ateneo physics professor who spearheaded the two-year-old innovation center, Interlinks is not meant to be just another show, a science fair for geeks and whiz kids.

The goal, he tells me, “is to nucleate these technologies.”

Translation: he wants to see some of these young scientists turn their ideas into viable businesses.

Perhaps, the unstated dream is to even turn Loyola Heights into another Silicon Valley, the Mecca of technology.

But Greg shakes his head.

“The Silicon Valley model hasn’t been replicated anywhere else in the world,” he says. And handled incorrectly, trying to be another Silicon Valley can turn into a waste of time and effort.

Not that the Philippines doesn’t have some of the key ingredients for creating a vibrant tech industry. There are many talented young people to take on that challenge, Greg says.

What’s missing, he suggests, is a different kind of smarts.

Greg’s story is, in a way, about that quest. Born in Springfield, Massachusetts, he grew up in Honolulu and attended high school in California. He went to college at Ateneo and later earned a PhD in Applied Physics from the California Institute of Technology. He then worked at the Hughes Research Laboratories, a career that lasted more than 30 years. He was already a lab director when he decided it was time to do something else.

So he returned to Ateneo to teach.

He’s been focused on a different approach to education, combining his own academic background and experience in the US high tech industry. That’s based on a weakness in Philippine academe in which academics typically have little business experience. “Very few of them have industrial experience,” he said.

In a way, this touches on a key strength that gave rise to Silicon Valley. Students and professors at UC Berkeley and Stanford didn’t just come up with wild ideas, they actually turned 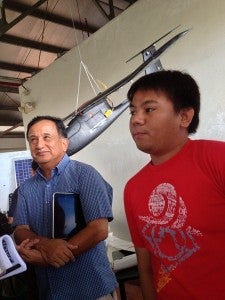 With initiatives like those pursued by the Ateneo Innovation Center, he says, “We can have high value small and medium enterprises.”

But it will take time, he says. It also will take a cultural shift. For one thing while the Philippines has plenty of talent, young people typically use all that education and talent to find jobs at big already established companies.

Striking out on your own is sometimes seen as too risky.

“We lost our tinkerers,” Greg continues. “We’re just stuck in our bookish ways.”

Changing that can take time. At the Loyola Heights Nerdfest there were signs that change was taking place.

Matthew Cua is chief executive of SkyEye. With a staff of 10, including Ateneo students Jay Honrado and Chris Favila, his company has designed drones used to monitor floods and inspect infrastructure projects.

Paul Cabacungan fell in love with solar power. It’s only partly because the technology has helped him cut his monthly electricity bill from 2,500 pesos to as low as 600 pesos. He founded Solar Rain which uses solar power to turn rain water into drinking water. The system is geared to rural or remote areas where safe drinking water is a serious problem 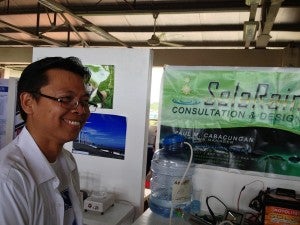 His technology even played an important role in the Sendong disaster. He had a drinking water system set up two days after the storm hit.

“This is a ten percent proposition,” Greg tells me. He quickly adds, “Maybe only five.”

That is, maybe only a handful of the nerd-entrepreneurs-innovators can score a hit, finding a way to build viable, even thriving, businesses from their wild ideas, from their science fair projects.

Still, those are good odds.

As Greg Tangonan says, “We’re just as smart as everybody else.”