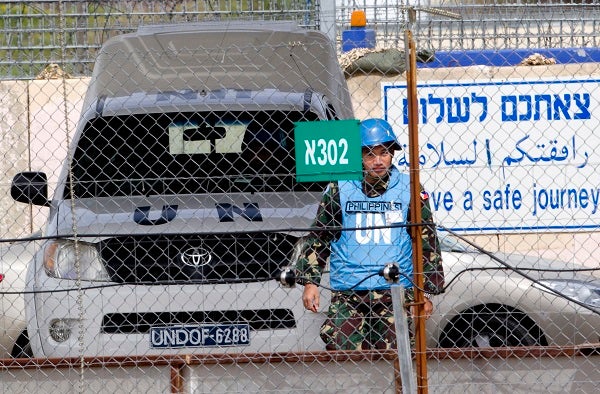 A U.N. peacekeeper from the Philippines crosses back from Syria at the Quneitra Crossing between Syria and the Israeli-controlled Golan Heights, Thursday, March 7. An international peace envoy to Syria on Saturday says Syrian rebels have freed 21 U.N. peacekeepers and have handed them to Jordanian authorities. AP/Ariel Schalit

AMMAN—Twenty-one Filipino UN peacekeepers seized by rebels in Syria arrived Saturday in Jordan, government spokesman Samih Maaytah told AFP, and the Philippines ambassador said she was heading to meet them.

“They arrived in Jordan; they are on Jordanian land now,” Maaytah said.

Ambassador Olivia V. Palala also confirmed that the peacekeepers had arrived in Jordan from neighbouring Syria.

“They are apparently inside Jordanian territory now. I am heading to the borders to meet them,” she told AFP.

Earlier, the Syrian Observatory for Human Rights earlier said the soldiers, who were abducted on Wednesday by rebels in the Golan Heights, had been released and were on their way to the border with Jordan and freedom.

Mokhtar Lamani, the Damascus representative of the new U.N.-Arab League peace envoy to Syria, confirmed to Associated Press the peacekeepers crossed into Jordan on Saturday afternoon.

The peacekeepers, all Filipinos, were seized Wednesday by Syrian rebels who initially said they would only free the hostages if Syrian regime forces withdraw from the area. They were held in the village of Jamlah, near the Israeli-controlled Golan Heights. With a report from Associated Press