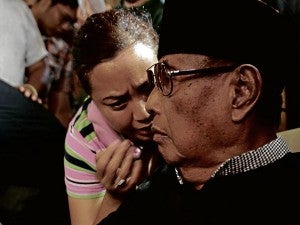 MANILA, Philippines—The daughter of Sultan Jamalul Kiram III maintained Saturday that no conspiracy was involved in the decision of her family and their followers to reclaim Sabah and slammed the Aquino administration for pursuing this angle to discredit the Sultanate of Sulu.

“The conspiracy theory is an insult to the Filipino people and to the Sultanate of Sulu, more so to the Rajah Mudah and his people,” Princess Jacel Kiram said in a press conference.

Jacel Kiram, 32, said that if there was any conspiracy, it was between President Aquino’s government and the political party of Malaysian Prime Minister Najib Razak, the United Malays National Organization (UMNO).

“(It is) purely for political exigency and popularity. This issue (about Sabah) to them is not important, especially at election time in Malaysia. To gain points instead of adhering to the call of the United Nations to a peaceful resolution, Razak did the opposite. He sent seven battalions supported by the Naval, Army, and Air Force to pulverize the Royal Army, disregarding life,”  Jacel Kiram said.

She said the conspiracy theory of the government was also meant to divert the public’s attention from what she described as Malacañang’s “mishandling” of the Sabah standoff that began a month ago.

She also accused Malacañang of acting as a “spokesperson against the interest of our own people in order to pacify the role of Malaysia in facilitating the peace process.”

“Question: How can PNoy allow the Filipinos in Sabah to be the sacrificial lamb in order to protect the political ambition of Razak at the same time propping up (his) declining credibility in crisis management?” Jacel Kiram said.

“I call on the Filipino people to be more circumspect and not to allow disinformation to formulate their beliefs,” she said.

The sultan’s spokesperson, Abraham Idjirani, said that the National Bureau of Investigation  has sent a subpoena to political strategist Pastor “Boy” Saycon to question him about the alleged conspiracy.

Idjirani said Saycon was set to appear at the NBI before noon Tuesday.

Saycon is a regular fixture in the Kiram home in Maharlika Village in Taguig. Jacel said his presence in their family home must be one of the reasons why Saycon was subpoenaed by the NBI.

Saycon had earlier told the Inquirer he was an adviser to Jamalul Kiram on the Sabah claim. The sultan conferred on him the title of “Datu Mutahmen” five years ago.

Text messages have been circulating, alleging that there was a “grand conspiracy” against the President’s peace efforts and that there was an unholy alliance among former President Gloria Macapagal-Arroyo’s followers and former National Security Adviser Norberto Gonzales, the New People’s Army, Peping Cojuangco (President Aquino’s uncle) and Boy Saycon, lawyer Oliver Lozano and the Marcos family.

“The real purpose is to destabilize the peace talks and the entire PNoy govt. These groups must not be allowed to succeed,” one of the text messages said.

The conspiracy angle surfaced just as United Nations Secretary General Ban Ki Moon met with Malaysia’s permanent representative to the UN and voiced excpressed the hope that the conflict would be resolved peacefully.

The Sultanate welcomed the efforts of the UN to resolve the conflict peacefully.