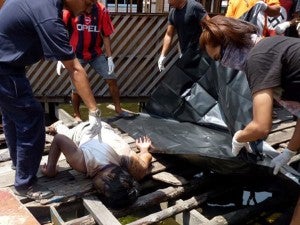 FELDA SAHABAT, Malaysia—Malaysian police said Saturday they had arrested 79 people in Sabah state on the island of Borneo as skirmishes to end a month-long incursion by armed Filipino Islamists left one more dead.

The death of a suspected follower of Sultan Jamalul Kiram III in a shootout Saturday raised the toll to 61 as Malaysian authorities pursued scores of Filipino gunmen who landed in Sabah last month to resurrect long-dormant land claims.

Federal police chief Ismail Omar said operations to “flush out” the Filipinos were continuing, with one militant shot dead as he sought to escape a security cordon around two villages and overgrown plantation and swamp land.

“Up to now the police have arrested 79 suspects whom we believe have some links with the intrusion,” he said without specifying where the suspects were seized or giving more details on them.

Ismail said Friday that police had arrested more than 50 men and women outside the battle zone under a security law. They were being investigated for “committing terrorist acts”, the New Straits Times reported.

Malaysia has vowed to end the incursion, its worst security crisis in years, and rejected a ceasefire call made by the leader of the fighters, who are followers of Kiram.

The sultan’s officials say about 235 people took part in the mission to reassert a historical claim over Sabah, just a short boat ride from Mindanao.

Since they landed on February 12, the main group of militants had been holed up in a sleepy farming village until two deadly shootouts with security forces a week ago triggered a military assault that scattered them.

However, reports of other gunmen elsewhere along the coast have sparked fears of a wider infiltration by fighters and the possibility of sympathisers already in Malaysia helping them.

Malaysian authorities say eight policemen and 53 militants have been killed in the crisis.

The incident has left the Southeast Asian neighbors in a prickly situation with elections in both countries to be held within months.