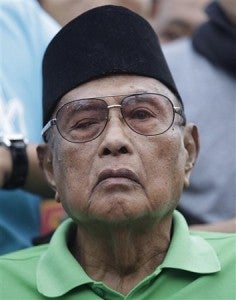 Filipino Sultan Jamalul Kiram III listens at the Blue Mosque in Manila suburb, Philippines, after undergoing dialysis at a nearby hospital Wednesday, March 6, 2013. Unlike many other Muslim royalties basking in grand palaces and opulent lifestyles, Kiram’s kingdom sits in a rundown two-story house in a poor Islamic community in Manila, the only hint of power and glory the title attached to his name. AP/Aaron Favila

DIGOS CITY—After labeling Agbimuddin Kiram’s forces in Sabah terrorists, the Malaysian government has launched a campaign to discredit the brother of the Sulu group’s leader, Sultan Jamalul Kiram III, along with an effort to link them with the Malaysian opposition.

In a report published this week, the state-owned news agency Berita National Malaysia (Bernama) accused Jamalul of “masquerading as the sultan of Sulu” and saying he “cannot lay claim to the defunct title.”

Bernama has always acted at the behest of the government, and is seen in Malaysia as the window to what the Barisan Nasional (ruling national coalition) thinks.

Ariff Sabri, a former leader of the United Malays National Organization (Umno)—the leading party under the BN, once described Bernama as a “psywar” machine for Umno and its allies and accused it of issuing “half-baked”  reports to discredit opposition figures.

“So don’t try to pull the wool over our eyes,” Ariff, who has since joined the opposition, said when Bernama tried to play down the opposition’s victory in at least five states in the 2008 elections.

In trying to discredit Jamalul, the Bernama report posted on  Thursday quoted an alleged Kiram family insider—whom it described as  having deep knowledge of the sultanate—as saying it was “wrong for him to [claim that he is] the heir [of] the last sultan of Sulu, Jamalul Kiram II, who died in 1936.”

“Jamalul Kiram III was never a legitimate descendant of the nine rightful  heirs of Jamalul Kiram II [who were named] in the 1939  ‘Macaskie  Judgment’ [as] eligible to receive cession payments, following the ceding  of Sabah, then known as North Borneo, to the British North Borneo Co. (BNBC),” Bernama quoted the unnamed source as saying.

Bernama, however, also quoted the source as saying that Jamalul is a member of the Sulu royalty.

But a copy of the official court document the Inquirer has obtained shows that Jamalul’s father, Datu Punjungan Kiram, is one of the nine heirs to the sultanate.

The leading political coalition in Malaysia also appears to have started a crackdown on the opposition.

Utusan Malaysia, a progovernment newspaper, published a report on Wednesday that tried to justify the claims of politicians identified with the Umno that Agbimuddin’s intrusion into Sabah was the handiwork of opposition leader Anwar Ibrahim.

Prime Minister Najib Razak said Anwar and opposition leaders were being investigated in connection with reports that they had met with members of the  Sulu royalty prior to the Feb. 9 “homecoming” of Agbimuddin and a group of armed followers of the Sulu sultanate.

In a story posted on its online edition, Utusan tried to establish Anwar’s  strong links with Filipinos by quoting his former secretary, Mohammad  Rahimi Osman, as saying his former boss had Filipino security.

Utusan said Rahimi identified the four Filipino aides of Anwar as Daniel Cruz, Noel del Rosario, Alfred Sese and Bong Oteyza. The four, according to Rahimi, have been working for Anwar since 2008.

“They are members of a specially trained commando team and possess a wealth of expertise,” Rahimi was quoted as saying.

Utusan also published an article that criticized Anwar for threatening to sue the newspaper for earlier reports about his supposed links to Agbimuddin’s group and the Sabah intrusion.

It quoted former People’s Justice Party chief Mahful Wahid Anwar as saying Anwar should not single out Utusan because even the foreign media—referring to the  Philippine Daily Inquirer—also carried a similar story.

Utusan also published a story on the challenge posted by Perkasa Indigenous Organization Malaysia (Perkasa) information chief Ruslan Kassim to Anwar  “to sue Philippine President Benigno Aquino” for linking the opposition to the Sabah claim of the Kiram family.

Umno leader Shahrizat Abdul Jalil said Anwar’s wife should answer the allegations because her husband did not want to explain his alleged involvement in the Sabah crisis.

“I am not accusing, but I want to ask. Why [is he] silent and [does]  not answer the allegations made by the media?” Utusan quoted Shahrizat as saying.

Anwar has denied having a hand in the Sabah intrusion. In a report published by The Star newspaper of Malaysia on Wednesday, he also denied meeting with the sultan of Sulu.

In an interview with Radyo Inquirer 990AM on Thursday, Anwar said he did not know Jamalul but he knew there were many claimants to the Sulu throne.

He said the intrusion into Sabah was “unacceptable.”

“We cannot allow militant activity within our borders,” Anwar said.

And yesterday, Anwar filed a defamation suit against Utusan and TV3 for linking him to the Sabah intrusion.

Across Malaysia, pro-Umno groups have staged protests against another opposition leader, Tien Chua, for allegedly linking the ruling coalition to  the Sabah crisis.

Bernama said the protesters accused Tien of being unpatriotic.

Tien said on Friday that he was “misquoted by the party paper” in the issue over the Sabah intrusion.

He said the Keadilan Daily took his statements out of context when it reported that he claimed the intrusion was a conspiracy involving Umno.

He said journalists contacted him for comment when news of the Sabah standoff broke out.

“I very clearly stated that the matter, at the time, was not confirmed and there was a media blackout here,” he said.

Denying he insulted the security forces protecting the country’s sovereignty in Lahad Datu, Tien said he would leave it up to the courts to clear his name.

“The accusation that I have insulted the security forces is complete slander and malicious lies,” he said. With reports from The Star/Asia News Network