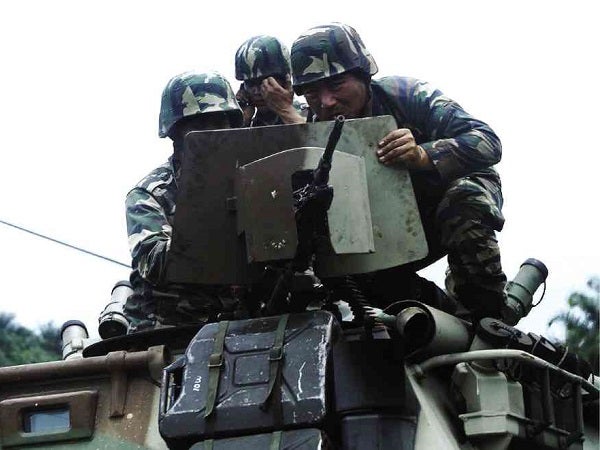 END GAME Malaysian soldiers atop an armored vehicle move in toward Lahad Datu on Thursday. MALAYSIA’S THE STAR/ASIA NEWS NETWORK

Malaysian police on Friday rounded up 79 people in Sabah for suspected links to the sultan of Sulu’s attempt to retake the territory as crack troops and fighter jets pressed an assault to end a confrontation with the sultan’s armed followers trapped in two villages in the eastern Malaysian state.

Federal police chief Ismail Omar said the arrests had all occurred in areas outside the battle zone where Malaysian security forces were chasing the followers of Sultan of Sulu Jamalul Kiram III.

“Outside the operation area, police already arrested certain suspects who we believe have links to the invaders,” Ismail said, referring to the armed force led by Jamalul’s brother Agbimuddin Kiram.

Ismail said those arrested were men and women, but declined to give any further details on the identities of those arrested and whether they were foreigners or Malaysians.

But a radio broadcast monitored by the Inquirer from Digos City indicated that those arrested were Tausug and Orang Suluk (people originally from Sulu) and they were arrested under the Security Offenses (Special Measures) Act of 2012 that human rights activists in Malaysia had criticized as unconstitutional and Amnesty International had described as an “oppressive law.”

The crackdown on suspected supporters of Jamalul’s supporters is part of the Malaysian government’s aggressive response to the intrusion into Sabah by Agbimuddin’s group.

Sixty people—52 of Agbimuddin’s fighters and eight Malaysian policemen—have been killed in fighting that began on March 1.

The Sarawak radio station reported that explosions from howitzer attacks were heard starting at 6:45 last night, hours after Malaysian F-18 Hornet fighter jets dropped bombs on an area in Tanduao village in Lahad Datu town where the Sulu sultan’s followers had been on the run since Tuesday.

No signs of surrender

Malaysian armed forces chief Zulkifeli Zin said at a news conference earlier in the day that there were no signs that Agbimuddin and his men were surrendering soon.

The United Nations on Wednesday called for an end to the violence in Sabah and for talks among the governments of Malaysia and the Philippines and Jamalul’s family to resolve the conflict.

Jamalul on Thursday declared a “unilateral ceasefire” and offered an exchange of prisoners after air strikes and heavy artillery attacks by Malaysian forces scattered his followers on Tuesday.

But Malaysia rejected the ceasefire offer and demanded that Agbimuddin and his men give up unconditionally or be killed.

With Malaysia’s rejection of a ceasefire, the armed followers of Jamalul have no other option but to “lay down their arms” to prevent further bloodshed in Sabah, the Department of Foreign Affairs (DFA) said Friday.

Malacañang said it would not ask Malaysia to reconsider its rejection of Jamalul’s offer of a ceasefire, leaving the sultan without a choice but to call his followers led by his brother Agbimuddin home and save their lives.

If he does not give that order, Agbimuddin and his men, on the run in two villages in Lahad Datu town in Sabah, will be wiped out.

Malaysian Prime Minister Najib Razak gave them an ultimatum on Thursday: “Lay down your arms or be eliminated.”

Najib told reporters in Lahad Datu that he had spoken to President Aquino, who asked him what Malaysians thought about Jamalul’s ceasefire offer on Thursday.

“I told him that they will have to lay down their weapons unconditionally,” Najib said.

Malacañang spokesperson Edwin Lacierda told reporters yesterday that Najib’s statement was clear, indicating that the Palace would do nothing to make Najib change his mind.

On claims that the government has abandoned the Sabah claim, Lacierda said “a member of the Kiram family” had warned the government against meddling.

The warning was given through acting Gov. Mujiv Hataman of the Autonomous Region in Muslim Mindanao, a government emissary to the Kirams, Lacierda said.

He said “what the sultanate of Sulu wants is an increase in the rent being paid for Sabah by Malaysia.”

The Sabah crisis enters a fourth week today, with 52 of Agbimuddin’s “royal security forces” killed in fighting with Malaysian police and military troops since the standoff between them erupted into violence on March 1.

Eight Malaysian policemen were killed in skirmishes with Agbimuddin’s group in Tanduao and in Simunul village in Semporna town.

The fate of Agbimuddin remained unknown as Malaysian elite military and police teams went into the final stage of search and mopping-up operations on Thursday at Tanduao and Tanjung Batu villages where the last of Jamalul’s followers had been cornered.

According to reports coming from Malaysia, Agbimuddin has failed to contact his family in Manila for the past two days and security forces expect to know what happened to him in a day or two.

Agbimuddin’s men have not eaten since they started running from air strikes and artillery bombardment on Tuesday, the reports said.

A “brigadier general” from the Moro National Liberation Front (MNLF), identified only as Musa, was among the 32 killed in a fire fight with Malaysian troops in Tanjung Batu on Wednesday.

Agbimuddin’s family in Manila said yesterday that he was “safe,” although he and his men were hungry.

According to the family’s spokesperson, Abraham Idjirani, Agbimuddin’s group had “regrouped” after being scattered by the Malaysian attack on March 1.

“They are constantly moving, not by boat, not by any means of transportation, but by themselves. They are on foot,” Idjirani said. “They are suffering from hunger.”

Commenting on the killing of the MNLF’s Musa in Sabah, Idjirani said Musa was “alive and well” in Lahad Datu.

As far as the sultanate of Sulu is concerned, he said, the assault on March 1 was the only encounter between Agbimuddin’s group and the Malaysian authorities.

Princess Jacel Kiram, daughter of Jamalul, said the “unilateral ceasefire” declared by her father on Thursday stood despite being rejected by Malaysia.

Raul Hernandez, DFA spokesperson, said Malaysia’s rejection of the ceasefire despite the UN call for an end to violence left Agbimuddin’s group no other option but “to lay down their arms to save lives.”

“[T]hat is what we’ve been trying to ask them (to do) from the beginning … so that further bloodshed would be avoided,” Hernandez told reporters.

Like Malacañang, the DFA, Hernandez indicated, is not asking Malaysia to reconsider its rejection of the ceasefire.

The Kirams, he said, can try asking the United Nations to issue another statement asking Malaysia to reconsider its decision to reject the ceasefire offer.

“It is within the rights of the Kirams to appeal to the UN,” Hernandez said.

The Philippines, according to Hernandez, asked Malaysia yesterday to allow Philippine consular officials access to the 10 followers of Jamalul detained in Lahad Datu.

Hernandez said the Philippines had also asked Malaysia to treat Filipinos under its custody humanely.

But Capt. Rene Yongque of the Navy’s Task Force 62 in Tawi-Tawi said none of the people in the boats was armed.

“They are not armed [and they are not] followers of Kiram,” Yongque said. “They are just ordinary people [who] may have fled (the violence) in Sabah,” he said.

Report of the stoppage came as Omar refuted rumors that 700 armed men from Sulu had entered Sabah.

“I received information that there are SMS and social media postings which falsely claim that these men have entered Kota Kinabalu and Tawau to create chaos,” Omar said at a news conference yesterday morning.

“It is not true. Do not believe in reports which are not confirmed by the police and military,” Omar said.

There were reports in the Philippines that 10,000 followers of Jamalul had crossed to Sabah to reinforce Agbimuddin’s group.

But the Philippine Navy said it was impossible for thousands of followers of the sultan to cross the Sulu Sea undetected.

“A report that thousands of Kiram’s followers have been able to slip through Sabah borders is extremely doubtful,” the Navy said in a statement.

“There are indeed a number of supporters of (the) Sabah claim, but the movement of hundreds, more so thousands, can’t be done unnoticed,” the Navy said. With reports Michael Lim Ubac in Manila; Julie Alipala, Inquirer Mindanao; AFP and The Star/Asia News Network