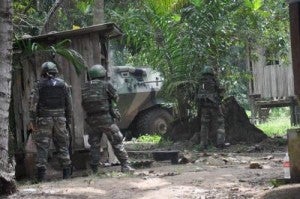 Azzimudie, the brother of self-proclaimed Sultan of Sulu Jamalul Kiram III, has failed to contact the Kiram family in Manila for the past two days and security forces expect to know what happened to him in a day or two.

The so-called Royal Sulu Army general identified as Haji Musa was among the some 30 gunmen killed in a shootout at Kampung Tanjung Batu on Wednesday.

Azzimudie and his trusted commanders were believed to be among those who slipped out of Kampung Tanduo on Sunday, two days before aerial and artillery bombardment began on Tuesday.

Azzimudie told The Star over the telephone Wednesday that one of his sons was with him in Tanduo along with 200 to 300 of his followers, including six women.

Malaysian security forces launched an all-out offensive against the intruders on Tuesday, after a stand-off that began on Feb 9.