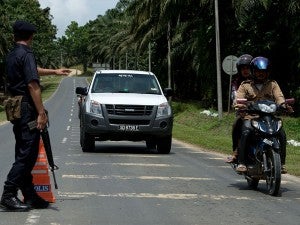 A Malaysian armed policemen (L) mans a security check in Sahabat 7 on the road leading to Tanjung Tanduo, in the areas where suspected Philippine militants are holding off, on the Malaysian island of Borneo on February 18, 2013. AFP FILE PHOTO / MOHD RASFAN

KUALA LUMPUR, Malaysia — Malaysia is reinforcing efforts to block armed Filipino intruders from escaping by sea or vanishing into Borneo’s population following deadly clashes that prompted the U.N. chief to urge both sides to seek a peaceful resolution.

The conflict has wreaked political havoc for both Malaysia and the neighboring Philippines, which spent weeks trying to dislodge nearly 200 members of an obscure Philippine Muslim clan who took over an entire Malaysian village to lay claim to a sprawling Borneo state they insist is theirs by royal birthright.

Malaysia mounted airstrikes and mortar attacks Monday against the clansmen, but most eluded capture in a coastal district brimming with palm oil plantations and forested hills.

Government and police officials said Wednesday they were tightening naval patrols and evacuating thousands of villagers away from danger.