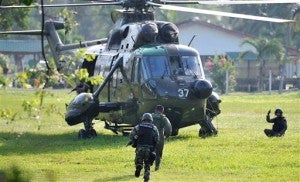 DIGOS CITY, Philippines—Malaysian aircraft took to the skies anew over Lahad Datu starting 8 a.m. Thursday as ground forces advanced farther inside the Tanduo area in search of the members of the so-called  “royal army” of Sultan Jamalul Kiram III of Sulu.

Malaysian police Inspector General Ismail Omar said over a Sandakan radio that the Malaysian aircraft, including F18s, were on an aerial survey mission.

The reporter of the radio station, who was stationed in Lahad Datu, said he  observed that the seven jets would pass over him in intervals of about four minutes.

“But there have been no bombs dropped yet,” the reporter said.