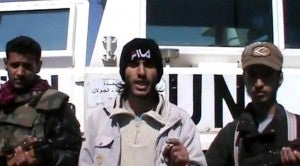 An image grab taken from a video uploaded on YouTube on March 6, 2013, allegedly shows armed fighters standing in front of a United Nations Disengagement Force (UNDOF) vehicle in the Golan Heights between Syria and Israel. UN deputy spokesman Eduardo del Buey told reporters the UN force had “reported that earlier today approximately 30 armed fighters stopped and detained about 20 peacekeepers within the area of limitation.” AFP PHOTO/YOUTUBE

DAMASCUS—Syrian rebels on Wednesday said they seized some 20 UN peacekeepers in the Golan Heights between Syria and Israel as rebels took total control of the key northern city of Raqa.

Diplomats in New York and the Syrian Observatory for Human Rights said the peacekeepers were from the Philippines.

A man identified as brigade spokesman Abu Kaid al-Faleh said the peacekeepers would not be freed until Syrian regime forces pull out of the area.

“If they do not withdraw, these men (UN troops) will be treated as prisoners,” he said, and accused the UNDOF of working with the army to try to suppress the insurgency.

“The Syrian regime, the UN and the European countries are all collaborators with Israel,” he charged.

The UN Security Council demanded that the rebels release the peacekeepers, and peacekeeping chief Herve Ladsous said negotiations were being held with them.

Meanwhile, UN High Commissioner for Refugees Antonio Guterres warned that one million Syrians have fled their homeland since the revolt erupted two years ago.

“With a million people in flight, millions more displaced internally and thousands of people continuing to cross the border every day, Syria is spiralling towards full-scale disaster,” Guterres said.

“We are doing everything we can to help, but the international humanitarian response capacity is dangerously stretched. This tragedy has to be stopped.”

Only a year ago, the UN agency had registered only 33,000 refugees. The exodus has intensified this year, the UNHCR said, with 400,000 Syrians fleeing their country since January 1, mostly to the country’s neighbours.

On the ground, the northern city of Raqa came under total rebel control on Wednesday, two days into battles with troops loyal to President Bashar al-Assad.

“It is the first provincial capital out of regime control.”

Earlier, an air raid on Raqa killed and wounded dozens of people, the Observatory said. Warplanes also bombarded Homs in central Syria, on the fourth day of a major offensive in the country’s third-largest city.

Near Damascus, the air force bombarded several rebel enclaves, said the watchdog which relies on a vast network of activists and medics on the ground.

The United Nations says at least 70,000 people have been killed since the start of the uprising, and the Observatory said at least 121 were killed on Wednesday.

Visiting the European Parliament in Brussels, the chief of staff of the rebel Free Syrian Amy said Assad’s regime could be toppled “within a month” if Western nations agreed to arm the insurgency.

“What we have now is little, very very little,” said Brigadier General Selim Idriss. “If we have the weapons we need, we can bring down the regime in a month.”

“The fact remains that diplomacy is taking far too long and the prospect of an immediate breakthrough is slim,” he told parliament after the European Union authorised the supply of non-lethal military gear and training to Assad’s foes.

In Cairo, the Arab League called for the opposition National Coalition “to form an executive body to take up Syria’s seat” and attend its next summit, in Doha on March 26-27.

Elsewhere on the diplomatic front, Russia said its point man on Syria would meet his US counterpart and UN-Arab League envoy Lakhdar Brahimi in London on Thursday.

Moscow is upset with a US decision to also step up non-military support for the rebels, and it opposes calls for Assad to quit before talks between the regime and opposition.

US Secretary of State John Kerry, in comments to Fox News aired on Wednesday, said “a lot of countries” are training Syrian rebels as part of stepped up efforts to topple Assad.