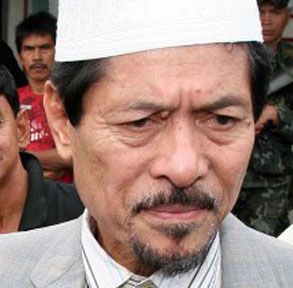 MANILA, Philippines—Moro National Liberation Front chairman Nur Misuari made a surprise visit to the house of Sulu Sultan Jamalul Kiram III in Maharlika Village in Taguig City Tuesday and dismissed as “wild speculations” allegations that he funded an expedition of Kiram followers in Sabah.

Misuari arrived while Kiram’s  daughter, Princess Jacel Kiram, was delivering a message from her father.

“This is to pay a visit to the Sultan Jamalul Kiram III. It is merely a coincidence that he arrived while we were having a press conference,” said Abraham Idjirani, the spokesperson and secretary general of the “Sultanate of Sulu and North Borneo.”

Misuari said he was on his way to the airport when he decided to drop by the house of the sultan.

“No one can dispute that (Sabah) is part of our territory, our sovereignty,” Misuari said.

He described as  “wild speculations” allegations that he funded the journey of  Rajah Muda Agbimuddin Kiram and their followers to Sabah.

“To finance them is out of the question,” Misuari said.