3 Filipinos guilty of importing weapons to US 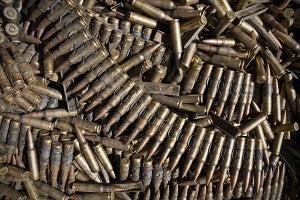 Sergio Syjuco, 26, Cesar Ubaldo, 27, and Arjyl Revereza, 26, were arrested January last year after they were caught selling the weapons to an undercover Federal Bureau of Investigation (FBI) agent in a sting operation conducted in the Philippines.

They were convicted after a four-week trial by a federal jury in US District Court in the Central District of California, said the Justice Department’s Criminal Division and the FBI’s Los Angeles Field Office in a joint announcement.

In an indictment filed on Jan. 12, 2012, the three men were charged with importing weapons to the US without a license in violation of the Arms Export Control Act.

According to the evidence presented at trial, the defendants conspired to sell the weapons to the undercover FBI agent posing as a buyer who planned to arm drug dealers in Mexican drug cartels and Mexican Mafia gang members.

In November 2010, Ubaldo introduced the undercover agent to Syjuco, who supplied the weapons, and Revereza, a police officer in the Philippines Bureau of Customs who facilitated the shipment of the illegal weapons.

The weapons included a rocket-propelled grenade launcher, a mortar launcher, an M203 single-shot grenade launcher and 12 Bushmaster machine guns, as well as explosives including mortars and grenades.  The trial evidence also showed the defendants had also illegally imported into the United States the highest level military body armor.

The weapons, which were tracked by authorities during shipment, landed in Long Beach, California, on June 7, 2011, where they were seized by the FBI.

In a controversial twist, the defendants’ lawyer accused the undercover FBI agent of spending US taxpayer dollars on prostitutes for himself and others during the 8-month investigation in the Philippines in 2010.

Deputy Federal Public Defender John Littrell filed a motion September last year asking the judge to toss the indictment against his clients as he accused the FBI agent of “outrageous government misconduct.”

The agent, who wasn’t identified in court documents, paid up to $2,400 each time he went to brothels with Syjuco and others to reward them for their work to secure weapons to ship to the US without a license, court documents show.

US government attorneys denied the allegations but acknowledged in court documents that the agent sought nearly $15,000 in reimbursements for “entertainment” and other expenses related to the investigation.

Bill Lewis, assistant director in charge of the FBI’s Los Angeles Field Office yesterday (Tuesday in Manila) said in a statement that the undercover agent and his family “endured true hardship during this lengthy trial, during which he was accused of unfounded illegal activity.”

“It’s clear the jury weighed the evidence in reaching a guilty verdict, and not theories put forth by the defense, to convict the defendants of the charges listed in the grand jury’s indictment,” Lewis said.

At sentencing, scheduled on June 9, the three men will face a maximum potential penalty of five years in prison and a $250,000 fine for conspiracy to import weapons into the United States, as well as 20 years in prison and a $1 million fine for the importation of all the weapons, excluding the 12 fully automatic Bushmaster firearms, according to a joint statement issued by Lewis and Acting Assistant Attorney General Mythili Raman.

The investigation was conducted by agents and investigators of the FBI, the US Secret Service and the Philippine National Bureau of Investigation. Deputy Chief Kim Dammers and trial attorney Margaret Vierbuchen of the Criminal Division’s Organized Crime and Gang Section prosecuted the case.