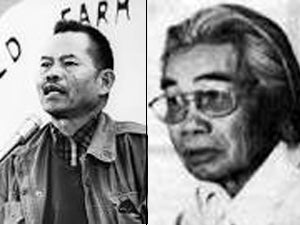 UNION CITY, Calif.—Filipino teachers, students, parents and their supporters from other communities are ramping up efforts to rename a middle school in honor of two Filipino American labor and civil rights leaders, Philip Vera Cruz and Larry Itliong.

“When this happens, which I think it will, this will be the first time a public school in the U.S. is named after Filipino American heroes,” says Joe Ku’e Angeles, spokesperson for the Pilipino American Society for Education, one of the groups leading the renaming effort.

Filipino advocates describe Philip Vera Cruz and Larry Itliong as “forgotten heroes,” who played key roles in the fight for farm labor rights in the United States, which benefited workers even in the fields of Union City, which used to be an agricultural area.

Union City is among the localities on the eastern shore of San Francisco Bay that has large Filipino populations. Filipinos make up a third of Union City’s residents. One in five students in New Haven Unified School District is of Filipino descent. Of Alvarado Middle School’s 1,400 students 28 percent are Filipino.

Passed over many times

The names of Itliong and Vera Cruz have been submitted for consideration many times before when new schools were opened or buildings were renamed in the city. Last year their names were top finalists in the last round of school renaming.

“The school district board acknowledged the Filipino American community’s patience after we got passed over in favor of other names in the past,” explains Santiago, who is also on the staff of James Logan High School.

As a result, according to Angeles, “the board has indicated its openness to renaming Alvarado Middle School in honor of Vera Cruz and Itliong.

The New Haven Unified School District board of trustees appointed a naming committee on Jan. 15, and will officially vote on the new name on March 19, after an earlier public hearing.

However, Angeles says there’s “the usual opposition from some people, like when a school was being named after Cesar Chavez.” Angeles is optimistic that support for the new name is stronger than any opposition.

Philip Vera Cruz,” says Erica Viray-Santos of Kaisahan, “but that can easily be corrected with information.”

A longtime Union City resident and history teacher at nearby San Leandro, Viray-Santos adds that some people are worried about the cost of logistically changing the name, “but Filipino community organizations have already raised funds to help with the cost, so that shouldn’t be a problem.”

Philip Vera Cruz and Larry Itliong, though rarely celebrated, were top leaders in the battle for farm workers rights. Vera Cruz was one of the founders of the Agriculture Worker Organizing Committee (AWOC), which later merged with Cesar Chavez’s National Farm Workers Association (NFWA), later giving birth to the United Farm Workers (UFW).

Itliong, a self-taught labor leader who organized protests in California and Alaska, founded the Filipino Farm Labor Union (FFLU) and was the president of AWOC.

Together, Filipinos and Latinos formed the UFW. Vera Cruz was its longtime vice president. Itliong also became a high-ranking member of the UFW, becoming the second vice president. Eventually, their joint efforts brought an end to several unfair labor practices and to key legislation to improve farm workers’ working conditions.

Supporters of Vera Cruz and Itliong say naming the school after the two will instill a sense of pride the large Filipino population and highlight the past solidarity work of Filipino and Mexican workers.

Supporters are trying to seal final board approval of the new name by gathering petitions from Union City residents and supporters from other localities.

“There’s a lot of support from the community,” reports Viray-Santos. “Last weekend high school students went petition-gathering and got 700 signatures in just two days—the community is really coming together for this, and it’s about time.”

The campaign was started by a coalition that includes the Pilipino-American Society for Education, Kaisahan, Filipino Advocates for Justice, the Filipino American Chamber of Commerce of Union City, Pilipino Youth Coalition and students of the Tagalog and Filipino Heritage Studies classes from James Logan High School.

The renaming effort also has the support of the New Haven Teachers Association, and petition backers are scheduling history workshops by Filipino Heritage Studies classes to educate the public on historic contributions of Vera Cruz and Itliong.