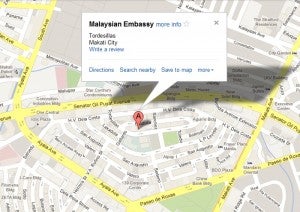 MANILA, Philippines—Police have augmented security around two areas in southern Metro Manila, in light of the ongoing standoff and ensuing skirmishes in Sabah between the Malaysian security forces and followers of Sulu Sultan Jamalul Kiram III.

Since Friday, police have been deployed to secure the Malaysian Embassy along Tordesillas St. in Makati City, and the area around the home of Kiram III in Maharlika Village in Taguig City.

Friday saw the first casualties in the three-week-old standoff between the claimants of Sabah, in Lahad Datu.

In a phone interview, Southern Police District police director Chief Supt. Jose Erwin Villacorte said that so far, despite the Sabah standoff leading to increasing bloodshed over the weekend, there have been no untoward incidents in the two secured areas in Metro Manila.

“We started to add security in the area as early as Wednesday, when the tension was escalating in Sabah. It was only a preventive measure. There was no specific threat, but we can’t disregard the possibility of retaliation from sympathizers,” Lukban said.

He said the police substation in the area was beefed up with augmentation forces from the Special Weapons and Tactics unit, as well as the mobile patrol unit and the security forces of nearby embassies. Makati City is host to a total of 55 embassies, Lukban said.

Lukban said the police is bracing for a rally at the Malaysian embassy on Tuesday, though he said they have yet to identify the group.

On the other hand, Taguig police chief Senior Supt. Arturo Asis said they were also receiving unconfirmed information about possible protest actions outside Kiram’s home, although as of Monday “there has been no untoward incidents or security problems” in the area since police personnel were deployed there Friday.

“The only crowd that has been there is the media,” Asis said.

Kiram’s home is being secured by the Taguig police and personnel from the National Capital Region Police Office.