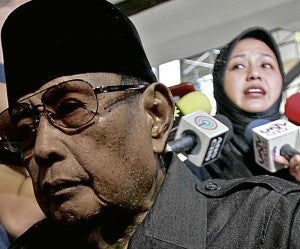 Sultan of Sulu Jamalul Kiram III and his daughter, Princess Jacel Kiram, blame the fresh violence in Sabah on the government’s refusal to talk to them about their claim to the Malaysian territory. RICHARD REYES

Supporters of the sultan of Sulu struck back on Saturday night, killing five Malaysian policemen and seizing four local government officials in an attack that indicated an escalation of violence to other parts of Sabah after the killing of 12 of the sultan’s followers in a clash with Malaysian security forces in Lahad Datu on Friday.

Abraham Idjirani, spokesman for the sultanate of Sulu, said an Islamic religious leader and his four sons were killed in the fighting in the seaside village of Simunul in Semporna town, 300 kilometers from Tanduao village in Lahad Datu, the site of a 3-week-old standoff between Malaysian security forces and a group of followers of Sultan Jamalul Kiram III.

Idjirani said two “highest” military officials, one police officer, and one “highest civilian” officer were being held by Jamalul’s supporters affiliated with Alianapia Kiram, a brother of the sultan.

Reports coming from Malaysia said two supporters of the Sulu sultan were killed in the shootout with policemen.

Idjirani said the group of sultanate followers led by Agbimuddin Kiram, another brother of Jamalul, had “occupied and controlled” Semporna, which is populated by Filipinos from Sulu, Tawi-Tawi, Basilan and the Zamboanga peninsula.

Alim Hashim Mudjahab, chairman of the Islamic Council Committee of the Moro National Liberation Front (MNLF), told the Inquirer in Zamboanga City that supporters of the sultan attacked a police station in Semporna on Saturday night.

“They freed more than a hundred Filipino Muslims who were arrested on Friday and they even captured the Malaysian police chief and his colleagues,” Mudjahab said.

“We are worried because it seems that these reports are not important to the Philippine government,” he said.

“As we are talking now (11 a.m. Sunday), tension is spreading as far as Sandakan and there are reports that some Tausug residing in Kota Kinabalu are ready to fight the Malaysian authorities,” he said.

Mudjahab said he received the information from “MNLF supporters in those areas.”

But Lt. Gen. Rey Ardo, chief of the military’s Western Mindanao Command, said he had not received information about an escalation of Friday’s violence in Lahad Datu to other parts of Sabah.

Idjirani said the violence spread to Semporna when Malaysian policemen pretending to round up undocumented Filipinos stormed Simunul village in search of relatives of the sultan.

He said the policemen shot one Imam Maas and his four sons and wounded one Imam Jul when they learned that they were taking care of the sultan’s relatives in the area, Alianapia and Amir Bahar.

The killings angered the villagers, who attacked the authorities and seized four Malaysian officials.

Idjirani said the sultanate of Sulu blamed the fresh violence on the Malaysian government, which, like the Philippine government, refused to deal with the Kirams on their claim to Sabah.

“This escalation (of the violence) is the result of the hardline policy of the Federation of Malaysia of not [sitting down to] discuss the standoff in Lahad Datu [for] a peaceful resolution of this issue, so that, like Malacañang, the sultanate of Sulu is washing its hands [of] this conflict now escalating in Sabah,” Idjirani told a news conference at the sultan’s home in Taguig City.

He said Jamalul, who learned that 10 of his followers were captured during the clash in Tanduao only on Saturday morning, asked his supporters in Semporna to take care and feed the Malaysian officials they had seized.

Jamalul did not call for the release of the Malaysian officials, as they could be used as witnesses to the “atrocities” committed by the Malaysian government, Idjirani said.

He said the sultan’s supporters in Semporna could not be blamed for their action because it was the Malaysian police who raided the town.

“These are unorganized efforts of the people, who can no longer stand the actions that the Malaysian government has been taking against them since 1982,” Idjirani said.

Jamalul’s daughter, Princess Jacel Kiram, said the people of Semporna would decide whether the four Malaysian officials should be released.

She said the people were not violent. If they were, they would have killed the four officials, she said.

Idjirani said people from Basilan, Sulu, Tawi-Tawi and the Zamboanga peninsula were departing for Sabah to help Agbimuddin’s group.

He said he did not know for sure whether those people, who were going to Sabah without consulting the sultan, were armed. It is possible, however, that they are armed, he said.

Jacel said her father was calling on his supporters to stay calm. The sultan, she said, was “doing everything he could” to solve the Sabah crisis peacefully.

Reports coming from Malaysia indicated that it was the sultan’s supporters who started the violence in Semporna.

Malaysian Inspector General of Police Ismail Omar said five policemen were killed when they were ambushed at a village on stilts in Semporna late Saturday.

Ismail said a police team had entered Simunul village in Semporna in a hunt for a group of gunmen when they were fired upon.

He said two of the gunmen were killed in the shootout with the police team.

Police have encircled the village to track down the remaining gunmen, Ismail said.

He said the security forces were on the hunt for 10 men, three of whom were armed and seen wearing military fatigues at two villages in the east-coast district of Kunak at about 10 p.m. on Saturday.

Ismail said police were trying to establish whether the Semporan and Kunak incidents were related to the Tanduao standoff that turned violent on Friday.

He said police arrested three men who were trying to slip through a security cordon around Tanduao late Saturday.

The three, who were armed with knives, were detained for questioning, Ismail said.

More security forces arrived in Semporna on Sunday, leading to evacuations of residents for fear of more fighting.

Filipinos were among the people leaving the town, reports coming from Malaysia said.

Radio reports from Sabah said a Filipino man armed with an M-16 rifle was beaten to death by residents of a village near Semporna Sunday morning.

The reports quoted villagers as saying the man was a follower of the sultan of Sulu.

The Semporna police chief, Mohamad Firdaus Francis Abdullah, had no comment about the incident.

Acting Gov. Mujiv Hataman of the Autonomous Region in Muslim Mindanao (ARMM) said he was surprised when told about reports of fighting in Sabah.

“What? Where did those [reports] [come] from?” Hataman said when contacted for comment by the Inquirer.

Al Tillah, policy adviser to the sultanate of Sulu, said President Aquino had created a team to handle the Sabah crisis.

He said the team was composed of Armed Forces Chief of Staff Gen. Emmanuel Bautista, Ardo and Hataman.

“The Sabah issue is not a military issue,” Tillah said. “It’s [a] political issue that requires diplomatic action.”—With reports from Julie S. Alipala and Alan A. Nawal, Inquirer Mindanao; and The Star/Asia News Network