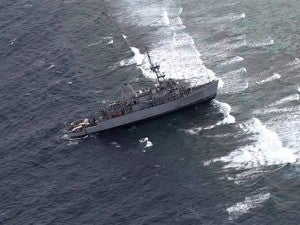 MANILA, Philippines – The USS Guardian dismantling operation continued on Sunday shortly after the vessel’s bridge deck was successfully lifted and transferred to a barge by the crane ship Jascon 25, said the Philippine Coast Guard (PCG).
Lt. Commander Armand Balilo, the PCG spokesperson, on Sunday said “the Guardian’s Level 2 (bridge deck) had been transferred to the (support ship) Archon Tide and later moved to the barge Seabridge.”
In a text message to the Philippine Daily Inquirer, he also said “the remaining equipment and materials at Level 2 have been removed piece by piece.”
“The lifting of the bridge deck on Saturday went well and was successful as planned and without any untoward incidents,” Balilo also disclosed, citing a report from the PCG team closely monitoring the salvage operation in the Tubbataha Reef in the Sulu Sea.
Earlier, he reported that while the weather in the reef area had been very good and the ship dismantling operation was progressing, the PCG did not “discount the possibility that the March 23 deadline for the removal of the Guardian from the reef may be extended.”
Balilo said that “aside from the changing weather conditions in the Sulu Sea, the salvage team is also considering the structural integrity of the ship, as well as newly discovered obstacles in dismantling the Guardian’s superstructure.” He did not elaborate.
Last week, the dismantling of the Guardian resumed with the removal of the vessel’s mast and funnel by the Jascon 25, which the Coast Guard said was the main vessel tasked with dismantling the grounded US Navy ship.
Aside from the Guardian, the Jascon 25, Archon Tide and the Seabridge, eight other vessels were in the vicinity, either involved in the salvage operation or observing the operations, including the PCG search-and-rescue ship, the BRP Pampanga.
The 68-meter US Navy mine countermeasure ship ran aground on the Tubbataha Reef, a United Nations Educational, Scientific and Cultural Organization-designated World Heritage Site, on Jan. 17 while on its way to Indonesia after a brief stop in Puerto Princesa City.

ADVERTISEMENT
FEATURED STORIES
GLOBALNATION
Expect more US vessels in South China Sea — PH envoy to US
GLOBALNATION
Philippines, US to begin 2-week joint ‘Balikatan’ exercises on Monday
GLOBALNATION
Lorenzana, Austin discuss Felipe Reef situation in phone conversation
Read Next
Sulu sultan open to talks
EDITORS' PICK
Would the military allow me to stay this long if I’m inutile? – Duterte
65% of Filipinos say Duterte’s health should be made public – SWS
Pre-order the new vivo Y20s [G] to get a free TWS earphone
In good spirits: SMDC helps farmers and residents through Kadiwa Market
Smart three-peats as country’s fastest mobile network – Ookla
DSWD chief admits ‘slow start’ in distribution of aid in ‘NCR Plus’
MOST READ
Vico Sotto frets getting photos of ‘butt vaccination’ from Pasig dwellers
Metro Manila to have shortened curfew hours from 8 p.m. to 5 a.m. under MECQ
San Miguel Corp. continues to invest heavily in the Philippines’ future
COVID-hit Roque slams ‘un-Christian’ query on how fast he secured hospital bed
Don't miss out on the latest news and information.