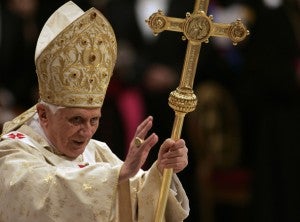 MANILA, Philippines — Filipinos in Asia’s largest predominantly Roman Catholic nation on Sunday went to church that awkwardly had no pope for the first time in 600 years and prayed for the smooth rise of a successor to Benedict XVI who can lead an embattled church.

Benedict stunned the world when he announced Feb. 11 he would resign, citing his age and frail health. His resignation, which took effect Thursday, ushered in a period known as “sede vacante” or “vacant see” — the transition period between papacies when a few Vatican officials take charge of running the church.

All cardinals worldwide have been summoned to the Vatican for a conclave to elect Benedict’s successor, who inherits a church facing a tide of secularism in Europe, as well as clergy sex abuse and corruption scandals that have underscored the need to pick a formidable successor to lead the world’s 1.2 billion Catholics.

Churchgoers and the clergy in the Philippines said they were not worried by the temporary absence of a pope but nevertheless felt the vacuum.

“There is something missing more or less in spirit,” said the Rev. Joel Sulse, who celebrated mass at the Santuario de San Antonio parish in an upscale residential enclave in Manila’s Makati business district. “It’s also a challenge. It’s like when there is no leader, you really have to stand for your convictions.”

Sulse’s parish and other Catholic churches across the Southeast Asian nation offered prayers for a hassle-free Vatican conclave of cardinals to elect a new pope.

Although Sulse said a new pontiff from the developing world may have a better grasp of problems such as poverty afflicting Catholics, Filipinos, he added, should pray for any pope who “can be strong yet loving.”

He told The Associated Press that a pope from the developing world would have “more … grasp as regards the realities.”

Churchgoer Miguel Ma. Guerrero said the next pontiff should be a dynamic leader who can lead the church in a modern era beset by long-pestering problems such as poverty.

In another Manila church in the working-class district of Baclaran, Catholics said they yearned for a pope who would be able to lead the younger generation onto the right path. One churchgoer said she wanted somebody like the late Pope John Paul II, who was welcomed by millions when he visited the Philippines in 1995.

“I have been praying for a new pope to be just like Pope John Paul II, who was close to the people and was very humble,” said Charlene Bautista, an insurance broker.

For the first time, a Filipino cardinal, Antonio Luis Tagle, has been regarded as among the group of cardinals who have a chance of succeeding Benedict. Although considered a longshot, Tagle’s inclusion among the so-called papabile, or papal candidates, has electrified many in the country, where past pontiffs had been welcomed by millions like rock stars.