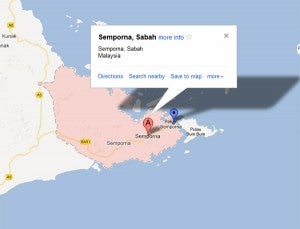 DIGOS CITY – Malaysian security forces suffered two more deaths as they came under fire in the town of Semporna in Tawau, some 150 kilometers from Lahad Datu, as they continue to search for members and supporters of the sultanate of Sulu’s “royal army” in Filipino-dominated communities on Sabah on Saturday evening, the Malaysian media reported Sunday.

Malaysia’s top police officer, Inspector-General Ismail Omar, told a Malaysian TV station they were now trying to establish if the armed men were followers of the Sulu “royal army” or locals, who have links with the “intruders.”

Bernama, the state media, said another member of the Malaysian policeman was killed in the ambush and two others were wounded but the online news provider Malaysia Today said two policemen had been killed and another was critically wounded.

Bernama quoted Malaysian police Omar as saying the 8 p.m. incident in Siminul village took place as Malaysian security forces were verifying reports that some people in the Filipino-dominated village possessed firearms and amid the continued search for fleeing members of Sulu’s “royal army.”

But Omar said he could not say if the ambush was staged by followers or “local” supporters of Agbimuddin Kiram, who had been on the run since Friday when Putrajaya decided to take on the “Sulu intruders.”

Hamza Taib, Sabah police commissioner, said during a news conference broadcast by a Sabah shortwave station that some 40 policemen were sent to Semporna following reports that some armed men had been sighted there.

He said the Semporna operation began around 4 p.m. and while police were heading for Siminul, a group of men numbering not more 10 fired on them.

Hamza said members of the Malaysian police were approaching a house in Siminul when they were fired upon by the unidentified men, using automatic rifles.

“However, I don’t think this has anything to do with the intrusion issue in Kampung Tanduo in Lahad Datu,” he said shortly after the ambush, even as he admitted that an investigation was still being conducted and that no suspect had been tagged yet.

But in a latter interview with TV3 Malaysia, Hamza said the police were now trying to determine if Agbimuddin’s men were actually involved in the ambush.

“The police were investigating whether the group, believed to be less than 10 in number, had any link to the armed intruders claiming to be from the royal army of the Sulu Sultanate in the Philippines holed up in Kampung Tanduo,” he said.

Hamza said the situation in Semporna remains under control despite the incident and that no further incidents had taken place after the ambush.

Earlier, reports had it that an explosion also rocked the Pulau Bum Bum police station in the said town but Hamza said these were without basis.

“The police had encircled the village in hunt of the attackers,” the Borneo Insider quoted Hamza in a separate report.