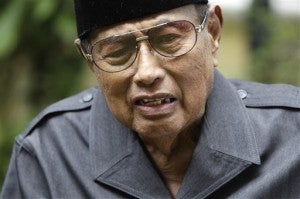 MANILA, Philippines—Political strategist Pastor “Boy” Saycon has come forward to admit he is an adviser to Sultan of Sulu Jamalul Kiram III on the Sabah claim.

But is quick to say that he works for the sultan on his personal capacity and not as secretary general of the Council for Philippine Affairs (Copa).

Saycon agreed to go on record and explain his involvement with the sultanate of Sulu after a standoff between Malaysian security forces and followers of the sultan in Tanduao village in Lahad Datu town in Sabah erupted into violence on Friday, resulting in the killing of 12 of the men under the command of the sultan’s brother, Agbimuddin Kiram, and two Malaysian policemen.

Reports said the elderly owner of the house seized by Agbimuddin’s group when they occupied Tanduao on Feb. 9 was also killed.

As a political strategist, Saycon had a role in the ouster of former President Joseph Estrada in 2001. But his influence in the administration of former president Gloria Macapagal-Arroyo that he had helped to bring to power was short-lived.

With Saycon in Copa are personalities that include President Benigno Aquino III’s own relatives, former Congressman Jose “Peping” Cojuangco and his wife Margarita “Tingting” Cojuangco who is running for the Senate in May’s midterm elections as an opposition candidate.

Saycon said the Cojuangco couple were not involved in the Sulu sultan’s Sabah action. He alone from Copa is involved and his involvement arises from his own personal conviction, he said.

“As an adviser to the sultan, I help him gather evidence and documents that will help the move to push the Sabah claim in the United Nations. I also help him strategize so that he will be able to focus his energy on the patriotic quest he has promised to pursue in spite of his lingering illness,” Saycon said.

Jamalul, 76, is suffering from a kidney ailment and has been undergoing dialysis treatment for more than a year.

Was it on his advice that Jamalul sent Agbimuddin and a number of followers to Sabah to stake the sultanate’s claim to the eastern Malaysian territory?

But he admitted that he had known about the plan since August of last year. He said he opposed the plan.

Saycon said there were four earlier attempts to cross into Sabah but he prevented them all.

The first attempt was in August of 2012. Saycon said it was Abraham Idjirani, secretary general and spokesperson for the sultanate of Sulu, who first told him about it.

Saycon said he spoke to Jamalul to convince him to dissuade Agbimuddin from carrying out the plan.

The second attempt was in September and Saycon said he sent Idjirani to Sulu to talk to Agbimuddin to drop the plan.

“Before I talked to the rajah mudah (crown prince), I heard that he was arguing against being stopped from acting when their followers in Sabah were being oppressed and they were ashamed that they could not do anything about it. He was complaining about the punishment of the Tausug in Sabah. They were being whipped by police before being deported to Sulu and Tawi-Tawi,” Saycon said.

After the government signed a preliminary peace agreement with the Moro Islamic Liberation Front in October, there was tension in the sultanate, but no plan to occupy Sabah was mentioned, he said.

The Kirams were apprehensive and disappointed that their request to the government to include the Sabah question in the peace talks with the Bangsamoro was not considered, Saycon said.

The third attempt came in November and Saycon said he appealed to the sultan to stop Agbimuddin from going.

The third attempt came shortly after Jamalul issued a “royal decree” authorizing Agbimuddin’s “journey back home” to Sabah. The decree was issued during a clan meeting in Zamboanga City.

Saycon said he did not know about the decree until the sultan told him about it.

He said that sometime before Christmas, he learned that Agbimuddin had gathered enough armed supporters and followers and was raring to cross into Sabah.

But, again, Saycon said he intervened and got Jamalul to stop Agbimuddin.

Agbimuddin demanded to know who was opposing his plan and he wanted to talk to the adviser, Saycon said.

That was the time that he talked to Agbimuddin by phone, he said.

Not last of it

“I thought I was able to convince him not to do such move as we are gathering documents and support for the plan to elevate the matter to the United Nations International Committee on Justice. He listened to me and even thanked me for my support to his brother, and I thought that was the last of it and no other attempts would follow,” Saycon said.

Next thing he heard, he said, Agbimuddin had landed in Sabah.

He said Jamalul explained to him that the sultanate had no choice but to do what its people had demanded it to do.

“They would lose their dignity if they failed to do it, as their followers were demanding that they retake Sabah. That’s how much the pressure on the sultan was,” Saycon said.

Saycon said he had no choice but support the sultan’s decision.

But did he inform the government that the Kirams planned to intrude into Sabah?

He did not, he said, as he was loyal to the sultanate of Sulu and the sultan trusted and adopted him as a member of the sultanate.

Saycon said his friendship with Jamalul spanned two decades, but it was only five years ago that he was taken in and given the title datu and the name “Mutahmen.”

“I am now Datu Mutahmen, a title given to me by the Sultan himself,” Saycon said.

He said that according to Jamalul, Mutahmen was a Muslim who helped Spain attain wealth and power in the 13th century.

In his case, he said, the sultan sees a Catholic Christian reversing that role, as he is helping Muslims regain what is historically theirs—Sabah.

“I have studied the Sabah claim extensively and I dare anyone to tell me that the claim is not legitimate and deserves the highest attention not just by the government of the Philippines but also of the United Nations,” Saycon said.

While admitting to being an adviser to Jamalul, Saycon said no one could really influence the mind and heart of the sultan.

“When your throne has been wronged for many, many decades, and when you have kept your faith in the intention of the Philippine government to help you, one administration to another, when the time came that he felt he owed it to his people to finally stand up and make the ultimate sacrifice, there was no turning back. It is his call from the very start and I as datu, while serving as an adviser, is also just another subordinate to him.” Saycon said.

He said he was ready to face the consequences of his supporting the sultanate of Sulu.

Pursuing the Sabah claim, he said, is not a shameful act.