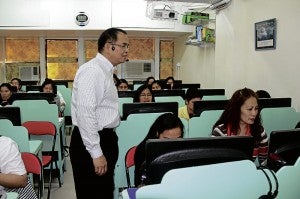 It may seem surprising but even in Hong Kong, a place so highly “cybertized” and quick to acquire new technology and gadgets, Internet cafés and computer shops persist.

And one of the more popular  is a Filipino computer shop in Central. Jess Advincula’s Pinoy Worldnet has created a Filipino community built on technology, entrepreneurship and camaraderie.

Advincula and his family relocated in 2006 to the Chinese special administrative region after his wife, Jo, a consumer-product marketing officer, was sent to work in her company’s branch office there.

But Advincula had no plans to be a househusband while his wife worked. He looked for something to test his entrepreneurial skills.

For Filipinos in Hong Kong, Central is exactly that, the center of their lives. Here they converge and socialize on their day-off, Sunday, in an area designated and secured by the city exclusively for their own  use.

The district offers practically everything a resident Pinoy will need to address social, financial, cultural and overseas workers’ concerns.  They can get call cards, Philippine canned goods and lutong bahay dishes. There are money changers, branches of Philippine banks and even a Jollibee branch.

The Worldwide House might as well  be called Pinoywide House because other nationalities seem to avoid intruding  into the Filipinos’ get-together.

Pinoy Worldnet is about 200 meters away.

Advincula, who honed his entrepreneurial skills through various business ventures in Manila, easily made a success of Pinoy Worldnet. 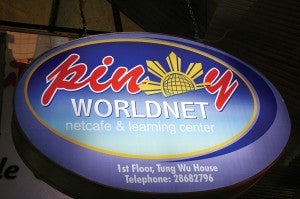 Pinoy Worldnet is getting not just expatriate Filipinos but also local residents as trainees.

But continued success, of course, would depend on how well he would be able to adapt to emerging situations or change course when needed.

Sensing that handheld computing was the wave of the future, Advincula opened a supplementary operation to ensure Pinoy Worldnet remained relevant. It has started offering basic day-long lessons on software, hardware, web and even business.

“This is more of an experiment because we want to develop options for the future. If everything goes well, we will pursue our plans of turning Pinoy Worldnet into a training center,” Advincula said.

While not officially a training center yet, many are already benefiting from what they learned in  Pinoy Worldnet’s informal courses. Around 600 Filipinos so far have taken the courses.

The learning modules used in the courses are free.

“We get good feedback from participants,” Advincula said. “We’re glad because they’re the lifeblood of our business and this is our chance to give back.”

Michelle Tomas, who used to work in Hong Kong, attended sessions on the basics of  setting up a business and bookkeeping.

Now back in Isabela where she has a carinderia in  her hometown, she credits the Pinoy Worldnet for the business fundamentals she learned.

Another “graduate” gave higher marks to Pinoy Worldnet’s free modules than the formal lessons he got in a known computer school.

Advincula is always preparing for the next digital trend. “Whatever happens to the desktop—whether mobile computing ultimately renders rental computing obsolete—we have been preparing for it… Right from the start, my goal has always been a training center with its own niche… And this niche is affordability and accessibility, especially for OFWs.

“I imagined this [the shift from desktop] was a few more years away. But, with the sudden rise of mobile-device computing, it looks like my timetable needs to be readjusted.”

But Advincula is adept at reinvention so he is confident he will cope with the challenges as Pinoy Worldnet shifts from a computer rental company to a training center.

He started as a government employee before moving to the private sector and starting his own businesses.

“If the training center pushes through, it will certainly be bigger than the Internet café operation we have now. And that’s our next move,” he says.

He already has the things and people he will need for this next move—the classrooms,  the machines, the trainers and the curricula are ready. Advincula is now trying to get from Philippine authorities  an accreditation for Pinoy Worldnet as a training center for overseas Filipino workers.

Henry S. Lopez is a creative director, scriptwriter and software instructor. He created and produced Tech Trip, a travel and technology television show, aired in 2010.  He can be reached at [email protected]