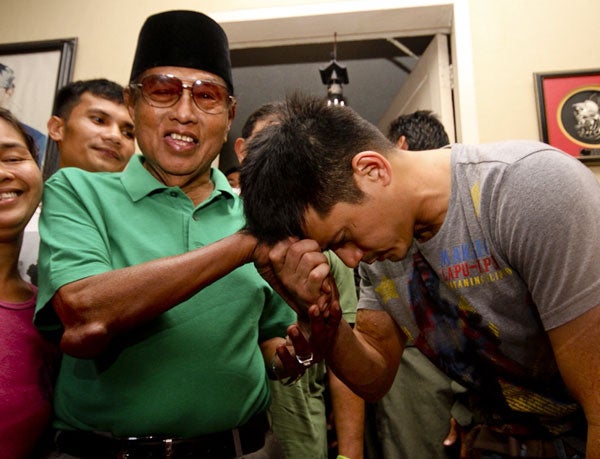 MANILA, Philippines—Action movie star Robin Padilla showed his support for embattled Sulu Sultan Jamalul Kiram III by paying him a surprise visit at his home in Maharlika Village, Taguig City, Saturday afternoon. He gave the ailing Kiram a check for P500,000 for his medical needs.

Padilla told reporters he owed his conversion to Islam to the sultan, who introduced the Islamic faith to the actor while he was doing time in prison  for illegal possession of guns.

Padilla immediately drew a crowd when he and a handful of companions arrived shortly after 2 p.m. by helicopter at  the Blue Mosque, which is adjacent to the Sultan’s home.

He had an audience with Kiram for about 30 minutes discussing the plight in Sabah of the sultan’s brother and heir and 235 followers, 10 of whom were killed by Malaysian security forces Friday morning.

“Marami akong tanong na kailangan ng sagot. Bakit pinayagan nating mapatay ang ating kapwa Pilipino (I have many questions that need answers. Why did we allow our fellow Filipinos to be killed)?” he added.

The actor sidestepped a questioned about the government’s  call on Kiram’s followers to come home, saying the government should sit down with the Kirams as the sultanate of Sulu used to have relations with foreign governments at the height of its power long ago.

On whether he wants the sultanate’s crown prince, who leads the expedition now in Sabah, to come home, Padilla said given the circumstances, he would not say anything to dishearten the Royal Security Force.

“Nandito ako para mag-apela. Kapwa Pilipino na natin ang pinapatay doon. Ako nasasaktan ho bilang isang Muslim at isang Pilipino (I am here to make an appeal. Our fellow Filipinos are getting killed there. I am hurting  as a Muslim and as a Filipino),” he said.

The sultan’s daughter,  Jacel Kiram, told reporters later that Padilla expressed his support for the Sultan’s cause.

The actor also handed over a check for P500,000 to Kiram, saying the money was for his medical needs (the Sultan requires regular dialysis) and not for buying weapons. Kiram needs to undergo two kidney dialysis sessions every week.