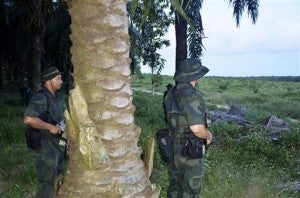 ZAMBOANGA CITY—Police and military forces in Western Mindanao went on high security alert on Friday after Malaysian police raided a village in Sabah and expelled armed followers of the sultan of Sulu from a village that the intruders had occupied for nearly three weeks.

Chief Supt. Juanito Vano, chief of the Western Mindanao police office, said security forces were watching out for “sympathizers” and relatives of the Kiram family and any moves that indicated the clan was sending “reinforcements” to Sabah to help the group led by the sultan’s brother, Agbimuddin Kiram.

“We are ready for any eventuality, including a spillover of the violence,” Vano said.

Lt. Gen. Rey Ardo, commander of the military in Western Mindanao, said government troops were ready to respond to the consequences of Malaysia’s decision to end the standoff by force.

Sulu Gov. Abdusakur Tan said the turn of events in Lahad Datu was lamentable and urged the Malaysians and the Kirams to discuss the Sulu clan’s proprietary claim to Sabah.

“Talk this over as brothers in Islam. We cannot resolve anything through violence. This would even complicate matters,” Tan said.

The governor called for sobriety among the Tausug amid fears that the supporters of the Kirams might sail to Sabah to reinforce Agbimuddin’s group.

Many Tausug here were outraged by the expulsion of Agbimuddin and his “Royal Security Forces of the Sultanate of Sulu and North Borneo” from Tanduao.

Mudjail Sailani, 20, cried when he heard news about the police raid on Tanduao.

“It’s not fair for the Aquino administration to allow our fellow Tausug and Samal brothers to die just like that in our own land. Sabah is our land, not theirs,” Sailani said.

“This is wrong, very wrong,” Momaina Abubakar, another Tausug, said.

Alim Hashim Mudjahab, chair of the Islamic Council Committee of the Moro National Liberation Front (MNLF), appealed for sobriety, but stressed that his group stood “one with the sultanate of Sulu in pursuing its Sabah claim.”

Some of the armed men in Agbimuddin’s group are MNLF members.

Octavio Dinampo, a professor at Mindanao State University, said “Sabah does not belong to the Malaysians.”

He warned that the attack on Agbimuddin’s group could result in “reprisals and revenge on the enemies.”

Many Malaysians live in Muslim communities in Mindanao, including Jolo.

Peter Paul Galvez, spokesperson for the Department of National Defense, said the Philippine Navy and the Philippine Coast Guard were tightly watching the coasts of Tawi-Tawi province for any attempts by the Kirams’ supporters to sail to Sabah to reinforce Agbimuddin’s group.

Galvez said the department was also watching the supporters of the sultan in Taguig City for their reaction to the news of the police raid on Agbimuddin’s group in Tanduao.

Galvez appealed to the sultan, his family, and their followers to stay calm and to avoid further conflict and more bloodshed. With a report from Jeanette Andrade