globalnation /
AMID END TO STANDOFF 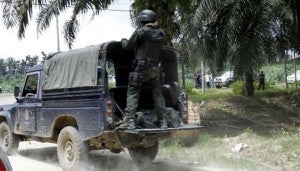 A truck carries bodies of the Malaysian police commandos killed in a mortar attack during a firefight with Sulu gunmen in Tanduo village in Sabah on Friday. – NORMIMIE DIUN/The Star-Asia News Network

PEKAN, Malaysia—Malaysian Prime Minister Najib Razak said Friday he has ordered ground commanders in Sabah to “take necessary action” to force the Sulu “royal army” to leave Lahad Datu even after his ambassador to the Philippines had told authorities in Manila that the standoff was over.

Raja Muda Agbimuddin Kiram, a brother of the self-proclaimed sultan and leader of the “royal army”, had avoided capture and remains in Sabah with his men to continue the fight, Idjirani added.

“This is just the beginning,” he warned.

Najib said two policemen were killed while three others were injured when the clash erupted after the Filipinos ventured 1.5 kilometers from the area in search of food. The Philippines’ DFA reported the same number of fatalities.

The owner of the house where the leader of the gunmen stayed during the impasse was also killed but the person’s nationality was not known, Philippine foreign department spokesman Raul Hernandez said.

Dozens of followers of Kiram had faced off with Malaysian security forces after they sailed from their remote Philippine island homes to press a territorial claim to Sabah on Borneo Island.

“I am very sad over the incident because what we had wanted to prevent, which is bloodshed, had actually happened,” he said. “Now there is no grace period for the group to leave.”

“Our men stumbled upon several of the intruders who fired at them, forcing our police to return fire,” he said, adding that security forces are now holding their ground around the 10 square kilometer radius.

He said police recovered some of the weapons of the Sulu group, comprised of about 180 followers and family members of the sultan, including about 30 gunmen, led by Rajah Mudah Azzimudie Kiram.

Hernandez said Manila had formally demanded a full account of the security operation that ended the standoff, as well as access to the detained Filipinos.

The Islamic Sultanate of Sulu once controlled parts of Borneo, as well as southern Philippine islands. It leased northern Borneo to Europeans in the 1870s.

While the sultanate’s authority gradually faded as Western colonial powers exerted their influence over the region, it continued to receive lease payments for Sabah.

The former British colony became part of the federation of Malaysia when it was formed in 1963.

Kiram and the other heirs of the sultan still receive nominal annual compensation from Malaysia in the equivalent of about $1,700.

Idjirani suggested last week that the men would stand down if the compensation were substantially raised. With Agence France-Presse