A standoff in Sabah erupted in violence on Friday morning, with 12 followers of the sultan of Sulu and two police officers killed as Malaysian Prime Minister Najib Razak declared his patience had run out.

Sabah Police Commissioner Hamza Taib told reporters that 12 members of the group, which was led by a brother of Sulu Sultan Jamalul Kiram III, were killed in the clash that began at about 10 a.m. and lasted for 30 minutes.

A spokesperson for the sultan of Sulu, Abraham Idjirani, denounced the raid on Agbimuddin’s group as a “massacre.” 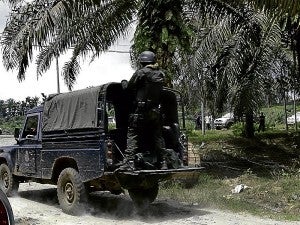 BLOODY FRIDAY A truck at the village of Tanduao in Lahad Datu carries the bodies of two members of Malaysia’s police commando. The two were among the casualties in Friday’s clash between Malaysian forces and armed members of the sultanate of Sulu, who had camped out at Lahad Datu since Feb. 9 to press their claim to Sabah. MALAYSIA’S THE STAR/ASIA NEWS NETWORK

Idjirani said the standoff was not over and that Agbimuddin’s group was still there and fearing more attacks by the Malaysian forces.

“No, the standoff is not over, unless there’s a concrete understanding or agreement that can be reached by the three parties,” Idjirani said, referring to the sultanate of Sulu and the Philippine and Malaysian governments.

Speaking to reporters, Hamza said no one had surrendered. He said Agbimuddin’s group remained holed up in the village and that the security operation was going on.

“We will assess the situation again. We want them to surrender peacefully. If they still insist, we have no choice, but there is no time frame,” he said.

Idjirani was speaking at the time when reports from Malaysia were saying 10 members of Agbimuddin’s group, including a woman, had been killed.

“The first shot was fired by the Malaysian commando forces. The fallen heroes . . . are 10,” Idjirani said.

He said the sultan had ordered that the casualties not be identified “so the situation will not escalate.”

The dead will be buried in Lahad Datu, he said.

“Our stand is the same. Rajah Mudah (Crown Prince) Agbimuddin Kiram will stay put in the area to discipline [our followers]. But if the Malaysians will attack, they will do the same,” Idjirani said.

He said that before the clash in Sabah, representatives of the sultan led by one of his brothers, Abdelnasser Kiram, were on their way to the Malaysian embassy for an “informal dialogue” with the Malaysian ambassador.

But reports of the clash in Tanduao came while the group was on the road, he said.

The sultan recalled the representatives “because the [shooting had] started,” Idjirani said.

“The sultan is still open (to talks) because our advocacy is still peace,” Idjirani said.

The Department of Foreign Affairs (DFA) could not immediately confirm deaths on the side of the group led by Agbimuddin, a brother of the Sulu sultan, but said it had reports that 10 either surrendered or were arrested.

The Star newspaper of Malaysia reported that two police commandos were killed by mortar fire and four other policemen were injured in the raid on Tanduao village in Lahad Datu town where Agbimuddin’s group had been holed up since Feb. 9.

Prime Minister Najib confirmed that two policemen were killed but said only three were injured in the clash.

The Star quoted Najib as saying he had given security forces authority to take whatever action they thought necessary to end the standoff.

Najib said Agbimuddin’s group had ventured 1.5 kilometers from their holed up area and opened fire at the Malaysian security forces.

“I am very sad over the incident because what we had wanted to prevent, which is bloodshed, had actually happened,” he said.

“Now there is no grace period for the group to leave,” he added.

Agbimuddin’s group, variously reported as numbering 250, 235 and 180, with about 30 armed and styled as the “Royal Security Forces of the Sultanate of Sulu and North Borneo,” had rebuffed efforts by the governments of both Malaysia and the Philippines to leave the village and return home to Sulu.

The sultan’s followers had insisted that Sabah belonged to the Sulu sultanate and they were only returning to their “homeland.”

Three extensions of a Feb. 22 deadline for them to leave had expired and the Philippine government had requested a fourth extension, but Agbimuddin had refused to lead his group out, saying he took orders only from his brother the sultan.

Hamza said the shootout was sparked when the sultan’s followers fired at security forces as they were tightening their cordon around Tanduao.

“The intruders fired at us, then we returned fire,” he said.

“The operation is still going on,” he said, adding that police continued to surround the area.

Agbimuddin told radio station dzBB in Manila that Malaysian police surrounding Tanduao opened fire at midmorning and that his group fought back.

“They suddenly came in. We had to defend ourselves,” Agbimuddin said.

Gunfire was heard in the background while Agbimuddin was being interviewed by phone.

In a second interview with the radio station, Agbimuddin said he had received reports that some of his men were wounded but he was not ordering a retreat or sue for a truce.

He said he himself was trading shots with the Malaysian policemen and he would continue fighting.

A source who was located near the area of the fire fight told the INQUIRER that Agbimuddin’s group was caught off guard, but was able to return fire with rifles and mortars.

“They came crawling and they fired the first shots,” the source said.

The attack, the source said, was carried out not by ordinary police forces of Malaysia but by military commandos acting on information from a civilian agent of the Special Branch.

Special Branch officers were among the first negotiators to talk with Agbimuddin after the group’s arrival in Lahad Datu, the source said.

The source said Jamalul talked with Agbimuddin by phone in the afternoon and told him to hold his ground, but with the information that direct negotiations with Malaysia were under way.

At sunset, the source said, Agbimuddin buried his slain followers.

DFA spokesperson Raul Hernandez said the department had received reports that the sultan’s followers had fled toward the sea.

Idjirani denied that any of the sultan’s followers surrendered to the Malaysians or were captured during the clash in Tanduao.

“There’s no truth to the report made by the Department of Foreign Affairs that Rajah Mudah Agbimuddin Kiram has been hurt. There’s no truth that 10 members of the Royal Security Forces of the Sultanate of Sulu and North Borneo have surrendered or have been captured,” Idjirani said.

He denied the information from the DFA that the sultan’s followers fled to the sea.

“How can they escape by sea in broad daylight? It’s like telling [the police], ‘Go ahead, shoot us,’” he said. With reports from Arlyn dela Cruz, AP, AFP and The Star/Asia News Network