Enrile on Sabah standoff: Follow the stance of Aquino 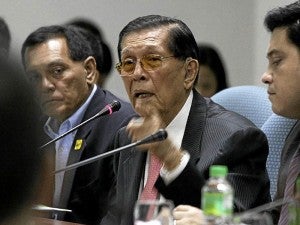 Enrile said in an interview that his father’s law firm had served as adviser to the American government in the Philippines before World War II and the country’s independence on the Sulu sultanate’s claim to Sabah.

“Earlier I knew about the history of Sabah because our DeWitt, Perkins and Ponce Enrile used to handle this problem for the governors general before we became a commonwealth. The Americans were also trying to assert sovereignty over Sabah,” Enrile said.

“I don’t know why but I think they did not know how to handle the sultan of Sulu, the ruling house of Sabah. We have complete studies on Sabah,” said Enrile, who used to be an assistant librarian at the law firm.

Asked what he thought the country should do considering the history of the Philippines’ claim and Sulu’s supposed proprietary stake in Sabah, Enrile said the country would be better off following the Aquino administration’s tack in handling the situation.—Norman Bordadora