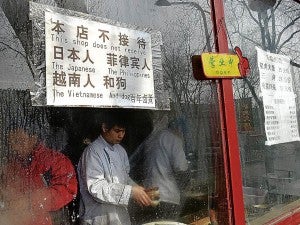 A restaurant in Beijing displays its sentiment toward the citizens of the Philippines, Vietnam and Japan with which China has territorial issues in the West Philippine Sea and the Sea of Japan. The sign says Japanese, Filipinos, Vietnamese and dogs are barred from the restaurant, presumably in that order. AFP

MANILA, Philippines—The Department of Foreign Affairs (DFA) on Wednesday shrugged off as an “isolated case” the reported ban on Filipinos by a Beijing restaurant.

DFA Assistant Secretary Raul Hernandez said Wednesday that the restaurant’s apparent decision to ban Filipinos, Vietnamese and Japanese nationals along with pet dogs was a private sentiment over their countries’ territorial disputes with China.

“We think that the notice that was posted on that shop in Beijing is a private view about the whole situation that is happening between the Philippines and China,” Hernandez told a press conference.

“We hope that it is not a state policy not to allow Filipinos to get to restaurants in Beijing,” he added.

A photo of the controversial window poster, first posted on the social networking site Facebook by Rose Tang, says: “This shop does not welcome the Japanese, the Philippines (sic), the Vietnamese and dog.”

The shop, Beijing Snacks, is located in the neighborhood of Houhai Lake in a popular tourist spot north of the Forbidden City in Beijing, according to Tang in her Facebook post.

Tang, a New York-based painter and writer according to her Facebook account, took the photo on Feb. 22 with the caption “Racism with a national twist.” The photo has been shared on Facebook more than 3,700 times.

The poster has also raised a howl in Vietnam.

The shop owner is apparently standing by his bias against certain foreign nationals, telling BBC News in China that the ban was an act of “patriotism” and that his Chinese customers support him.

The Philippines and Vietnam are among the most vocal Southeast Asian nations in pursuing their claims over territories in the West Philippine Sea (South China Sea), contested waters that are almost entirely claimed by China.

The Philippines has filed several diplomatic protests before the United Nations but China continues to refuse international arbitration and insists on bilateral talks.

Japan, meanwhile, is locked in a dispute with China over territories in the East China Sea.

Hernandez said it was the first time that such a ban was reported in China. But he said there had been no reported incident of discrimination among Filipino citizens.

There are some 12,500 Filipinos residing in mainland China, according to the DFA.—With Matikas Santos, INQUIRER.net