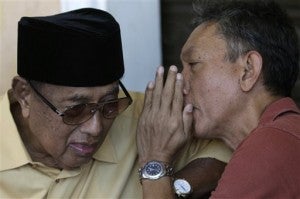 Filipino Sultan of Sulu Jamalul Kiram III, left, listens to a supporter at his house at Maharlika village in Taguig City on Monday, Feb. 25, 2013. The standoff between Malaysian security forces and an armed group of followers of the sultan entered a third week on Monday with hopes running high that the drama would end within the next 48 hours. AP PHOTO/AARON FAVILA

MANILA, Philippines—The standoff between Malaysian security forces and an armed group of followers of the sultan of Sulu entered a third week on Monday with hopes running high that the drama would end within the next 48 hours.

The Malaysian government extended the deadline for the armed group to leave the village of Tanduao in Lahad Datu town by another 48 hours to allow time for talks between emissaries of the Philippine government and the family of Sultan Jamalul Kiram III for the recall of the so-called Royal Armed Forces of the Sultanate of Sulu and North Borneo.

The first 48-hour extension of the Feb. 22 deadline expired on Sunday as the Philippine government sent a Navy ship to pick up the women and children among Jamalul’s followers to get them out of harm’s way in the event the Malaysian forces were forced to storm the Filipinos’ camp.

A statement from the Department of Foreign Affairs (DFA) said the ship was leaving for Sabah from Bongao, Tawi-Tawi, on Sunday night.

But the DFA said Monday the ship was still in Tawi-Tawi, awaiting diplomatic clearance to enter Malaysian waters and be on standby off Lahad Datu to receive the noncombatants from the armed group led by Agbimuddin Kiram, brother of Jamalul, who ordered the intrusion into Sabah to press his clan’s claim to the territory.

“We have learned that [Malaysian forces] have surrounded the area. So what we want to happen is [for] this group to now decide to leave the area for safety and get on board our humanitarian ship,” said DFA spokesman Raul Hernandez.

“We don’t want them to get hurt, to think of resorting to violence or whatever. That’s why we sent a ship there. It’s ready to go to the border when we have people who are ready to be moved and fetched,” he said.

The plan is to send the ship to Sabah once Jamalul’s followers heed the government’s appeal for them to come out and return home.

Malaysian vessels will ferry them to the border and transfer them to the Philippine ship, Hernandez said.

“Hopefully, before Tuesday, they will already be on board our ship,” he added.

“The ship will stay there as long as it is needed, as long as the offer to take care of them is there. It’s a humanitarian mission,” presidential spokesman Edwin Lacierda told reporters in Malacañang.

Aside from carrying food supplies, the ship is also equipped to treat injured people.

Earlier reports said the ship would also pick up members of Agbimuddin’s group who would choose to leave, but Lacierda said he hoped the women would urge the rest “to come home.”

Another vessel had reportedly left Sulu early Monday for Sabah.

Philippine officials said the ship was transporting a member of the Sulu sultan’s family accompanied by certain government officials.

Tawi-Tawi Gov. Sadikul Sahali told reporters that he knew about the vessel from Sulu but did not disclose who was on board.

Talks were going on Monday between government emissaries and the sultan’s family despite the reported hardlining of Jamalul.

“We have some people whom we have sent to talk to the family and the group in that area and we are hoping they will be convinced to leave the area for their safety,” Hernandez said.

A brother of Jamalul whom the government had hoped would help convince the sultan to call his followers home Monday said he was not informed about the humanitarian mission until after the ship had left port.

“I know there was a ship. But they told me about the mission after the ship had left. What’s that?” Esmail Kiram said.

That ship, he said, will not return with its intended passengers.

The sultan’s followers will not take the ship, he said, because “they will never leave their own homeland.”

“This is do or die,” Agbimuddin, the armed group’s leader, said in an interview with Radyo Inquirer 990 AM.

“I believe we are right [and] this place belongs to us. We will stay,” Agbimuddin said.

Agbimuddin said he was not concerned about the Malaysian deadline. He and the “royal army” would stay to assert their claim to Sabah, he said.

He said the Malaysian officials he had spoken with tried to convince him and his group to go back to Zamboanga and discuss the claim there.

“I said, why should we bother? Why can we not talk here?” Agbimuddin said.

“We didn’t come here to make war or make trouble for the authorities or anybody here. We just want to live in our place. This place belongs to us,” he added.

“If we will return home, then we will go back to zero. And we pity the Muslim and Christian Filipinos who will be left behind. We know what the Malaysian police may do to them,” he said.

But a simmering discontent is believed to be building up within the ranks of Agbimuddin’s group.

Word filtering out from Tanduao was that several subcommanders of the group had stopped some of their hungry followers from leaving and gunshots were heard on Sunday.

But Sabah Police Commissioner Hamza Taib denied reports of gunfire or some of Agbimuddin’s men being shot.

“It is not true,” said Hamza, who arrived in Lahad Datu Monday morning for an update on the standoff.

Reports of gunfire from Agbimuddin’s group reached Manila on Monday.

An Inquirer source said the gunshots were a warning to stop followers of the sultan who wanted to leave.

“The shots were probably meant for those who went with [Agbimuddin] but now want to go home,” said the source, a Philippine diplomat.

No one was hurt, the source said, but the gunshots “startled the already edgy security forces.”

The diplomat confirmed that the Malaysians extended the deadline for the group to leave by another 48 hours, ending Tuesday.

All was quiet in Tanduao on Monday, the source said.

Vice President Jejomar Binay has joined the efforts to convince Jamalul to end the crisis peacefully.

Binay met with Jamalul on Sunday night and told the sultan that he was willing to bring the Sulu sultanate’s Sabah claim to the United Nations.

“He explained to me their position and I listened to him,” Binay said in a press statement released Monday.

“I then reiterated the position of the Philippine government and renewed my appeal for sobriety,” Binay said.

“I emphasized that the parties should exert all efforts to arrive at a peaceful resolution,” he said.

Jamalul confirmed the meeting with the Vice President.

He told reporters on Monday that Binay gave his word to help the sultanate find a peaceful solution to the standoff.

“The Vice President is also in favor of what we are doing,” Jamalul said.

“He asked if it was true that Malaysia was paying us [for Sabah]. When I [explained to him the situation], he said, ‘In that case, that’s ours.’ It’s the Vice President saying that that’s ours. That includes him,” Jamalul said.

Asked if Binay offered him any specific help, he said: “He did not promise anything. But he said he is willing to assist me.”

Jamalul went on: “When I told him about the sultanate of Sulu, I thought tears flowed from the eyes of the Vice President. He said, ‘Don’t worry. If in case the President did not want to help you, I will [still help you].’ That’s what he said.”—With reports from Nikko Dizon, TJ Burgonio and  Marlon Ramos in Manila; Karen Boncocan, Inquirer.net; Julie S. Alipala and Jeoffrey Maitem, Inquirer Mindanao; and The Star/Asia News Network