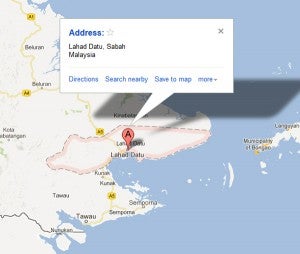 MANILA, Philippines– Shots have reportedly been fired in Lahad Datu in Sabah on Sunday afternoon, which were believed to have come from the group of Raja Muda Azzumudie Kiram as a warning to supporters who might want to leave the area, the INQUIRER learned Monday.

The source, a senior Philippine diplomat, said the Malaysian security forces were believed not to have fired back.

Malaysian police have cordoned off Tanduo village where Azzumudie and some 180 of his followers, some 30 of them armed, have been holed up since arriving in Sabah last Feb. 12 in what they said was laying their historical right to the resource-rich land.

“The shots were probably meant for those who went with Raja Muda but now want to go home,” the INQUIRER source said.

The source also said the Malaysian government has given another 48-hour extension to the self-styled Sulu Royal Army to leave Lahad Datu.

The Philippine government asked for a four-day extension after the Friday deadline lapsed.

The Malaysian government instead extended the deadline to Sunday and on Monday gave another 48-hour extension that would lapse on Tuesday.

The source asked not to be named as he was not authorized to speak to the media.

The source said there were no casualties but the shots “startled the already edgy security forces.”

The standoff continues but it has been quiet in the village since Monday morning, the source added.

A humanitarian ship was dispatched from the Philippines Sunday night to pick up some 150 civilians, the unarmed persons in Azzumudie’s group, and bring them back to the Philippines as the second deadline by the Malaysian government for them to leave lapsed on Sunday night.