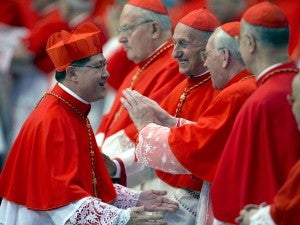 MANILA, Philippines—Manila Archbishop Luis Antonio Cardinal Tagle, the second youngest member of the College of Cardinals which will elect the next Pope, has been tagged by Church observers as one of the papabile, or the cardinals who may likely become the Pontiff of the Roman Catholic Church and its 1.1 billion members around the world.

In his review of the papabile, CNN senior Vatican analyst John Allen on Friday dubbed Tagle as the “Great Asian Hope” for the papal throne.

Allen said Pope Benedict XVI’s resignation due to old age benefited Tagle the most among the papabile but he added that some cardinals may have doubts Tagle could clean up the Vatican.

“One could make a pretty strong argument that nobody’s chances of becoming the next Pope benefit more from Benedict XVI’s resignation than those of Cardinal Luis Antonio Tagle of Manila in the Philippines,” Allen wrote in an article posted on the website of the National Catholic Reporter.

“Under ordinary circumstances, Tagle’s youth would be seen as an almost insuperable bar to election. At 55, he’s three years younger than John Paul II was when he was elected in 1978, so a vote for Tagle would be tantamount to a vote for another long papacy, perhaps as much as 30 years,” he added.

Allen said many cardinals might balk at choosing a young Pope and see it as an “awfully big risk.”

“Now that the precedent has been set that a Pope can resign, however, the calculus is different. Tagle could give the church 10 or 15 years, then step aside—a thought that may well induce some cardinals to look past his age to other qualities,” Allen said.

“When they do, they’re likely to find a lot to like about the man touted as the Great Asian Hope to take over the Throne of Peter. One Filipino commentator has said Tagle has a ‘theologian’s mind, a musician’s soul and a pastor’s heart,’” he added.

Tagle has cancelled a scheduled campus tour as he prepares to leave for Rome to witness Pope Benedict XVI’s formal resignation on Thursday, Church officials said on Saturday.

“He is attending the last Mass (of the Pope) with the cardinals on the 28th,” said Fr. Nono Alfonso SJ, executive director of Jesuit Communications, one of the organizers of Tagle’s dialogue with students of Centro Escolar University in Manila.