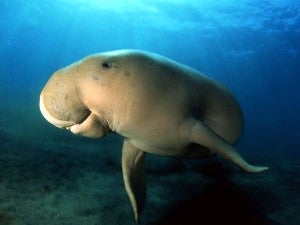 MANILA, Philippines – Four more nations have signed an international pact to protect the dugong, a mysterious marine mammal that used to be a constant presence on coastlines around the world, including the Philippines, but whose numbers are now in decline.

Bangladesh, Egypt, Somalia and Sudan joined 21 other signatories to the Memorandum of Understanding on the Conservation and Management of Dugongs and their Habitats throughout their Range, or “Dugong MOU,” a United Nations conservation agency said.

On February 19-20, the Philippines played host to the Second Signatory State Meeting for the Dugong MOU, which took effect in 2007 under the auspices of the United Nations Environment Program’s Convention on the Conservation of Migratory Species of Wild Animals (UNEP/CMS).

Dugongs and manatees are also known as sea cows.

According to a press release from the UNEP/CMS, the meeting attracted government officials and experts who discussed the status of the dugong and shared information on related conservation efforts worldwide.

The International Union of Conservation of Nature (IUCN)’s Red List of threatened species classifies the dugong as vulnerable, suggesting it might be extinct or declining in a third of its range, and of unknown status in half of its range.

The range of the dugong spans at least 48 countries and an estimated 140,000 kilometers of coastline, according to the IUCN.

It is not clear how many dugongs remain in the Philippines, but in 2011 an officer of the World Wide Fund for Nature-Philippines said there could be fewer than 500 individuals.

The marine mammals, they said, are affected by a range of human-related threats such as capture in net fishing gear and habitat degradation. In addition, extreme weather patterns such as severe storm events destroy critical sea grass beds on which dugongs depend, the experts said.

But UNEP/CMS said there were encouraging signs for supporters of dugong conservation, noting that 10 new countries had signed the MOU since the first meeting of the signatories in 2010.

“The plight for survival of the charismatic dugong has captured people’s imagination on an international scale…. The governments of the 26 nations attending are demonstrating their commitment to take positive action,” it said in the press release.

“A number of coastal communities that have been approached to participate in conservation projects have shown their willingness to make adjustments in an effort to live in harmony with dugongs,” it added.