Kirams given till Friday to recall forces
By: Norman Bordadora - @inquirerdotnet
Philippine Daily Inquirer / 12:02 AM February 21, 2013 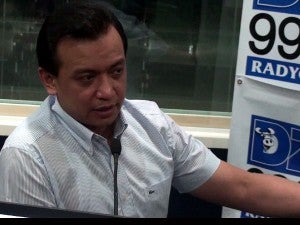 CEBU CITY—Reelectionist Sen. Antonio Trillanes IV on Wednesday called on the Aquino administration to make known its policy on the country’s claim to Sabah and on the standoff between Malaysian security forces and a group of armed followers of the sultan of Sulu in the eastern Malaysian territory.

The standoff in Tanduao village in Sabah’s Lahad Datu town has entered a second week, with Malaysian authorities saying on Wednesday that the situation is under control and that the Filipinos from Sulu will be deported soon.

Emissaries from the Aquino administration are working quietly to convince Sultan Jamalul Kiram to recall his followers from Sabah.

According to a highly placed source of the Inquirer in the Cabinet, Jamalul and his other brother, Bantilan Esmail Kiram II, must decide by Friday whether to call their followers home.

On Wednesday, Esmail was going to see Jamalul, who is undergoing dialysis in a Manila hospital, to talk to him and make a decision, the source said.

It is believed that the Malaysian government has given the sultan’s followers a deadline to leave or be rounded up and deported, but agreed to an extension of the deadline “by a few days” to allow the sultan and his family to reconsider their demand to stay in Sabah.

President Aquino’s former backchannel link to Beijing at the height of tensions between the Philippines and China over a territorial dispute in the West Philippine Sea (South China Sea) last year, Trillanes told reporters here that he would brief Aquino on the Sabah situation soon.

But the former Navy officer said he needed to know first the administration’s exact policy on Sabah, the former North Borneo and part of the sultanate of Sulu whose heirs are now agitating to regain.

The 300 armed Filipinos holed up in Tanduao are led by Agbimuddin Kiram, brother of Jamalul, who authorized the occupation of Sabah through a “royal decree” last November.

Agbimuddin and his group landed in Lahad Datu on Feb. 9, was discovered three days later, and now surrounded by police, military and naval forces waiting either to escort them out for deportation or storm their camp if they insisted on occupying what they called their “homeland.”

DFA must speak up

Trillanes said it was “high time the Department of Foreign Affairs articulate[d]” the government’s policy on Sabah. “[U]ntil then we’ll have to withhold further comment because this is a very sensitive issue [and] it involves the lives of our countrymen in Sabah,” he said.

Trillanes, who is running for reelection on the administration coalition’s senatorial ticket, said he intended to discuss the impasse with the President soon.

Another candidate on the administration ticket, former Sen. Ramon Magsaysay Jr., on Tuesday suggested that the government stop Jamalul Kiram from fueling the tension in Sabah.

Magsaysay, a former chairman of the Senate committee on national defense, said Jamalul was citing “complex issues” that should not be brought into the negotiations for a peaceful resolution of the standoff in Sabah.

Magsaysay issued a statement urging diplomatic efforts to end the standoff and calling on Jamalul’s followers to return to the Philippines.

“The most important is a peaceful settlement without rocking the relationship between Malaysia and the Philippines,” Magsaysay said.

“They should not use force,” Magsaysay said.

“It’s very embarrassing during these times of good diplomacy. We must remember that Malaysia is a very friendly country to us. Let’s discuss the issue diplomatically,” he said.

An independent candidate for the Senate, former Philippine Constabulary chief Ramon Montaño, on Wednesday said retired generals preferred that the government take the Sabah question to the United Nations, as it did with the Philippines’ territorial dispute with China in the West Philippine Sea.

Montaño added, however, that the government should insist on the right of the followers of the Sulu sultan to stay in Sabah until the question of ownership is resolved by the United Nations.

“Until then, there should be no use of force,” he said.

“We should support them. [Sabah] belongs to the sultanate of Sulu. Let them stay there,” Montaño said.

Supporters of the heirs of the Sulu sultan prepared on Wednesday to picket the Malaysian Embassy in Manila in  support of the cornered group of Agbimuddin in Sabah.

Melchor Chavez, a spokesman for Sultan Rodinood Jalaspi Kiram II, told reporters at a news forum in Manila that supporters of the heirs were gathering followers for a march on the Malaysian Embassy, during which they would declare the Malaysian ambassador persona non grata in the Philippines.

Chavez said Jalaspi Kiram had a pending request in the United Nations for mediation in the Sabah ownership dispute.

Former Ambassador Roy Señeres said at the forum that President Aquino could be accused of treason for his admission that the Sabah claim was “dormant.”

Señeres said he supported proposals for the termination of a lease agreement between the heirs and Malaysia.—With reports from Michael Lim Ubac, Jerome Aning and Dona Pazzibugan