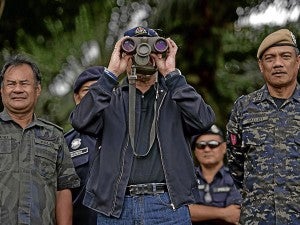 CLOSE-UP VIEW Malaysia’s Home Minister Hishammuddin Hussein uses a pair of binoculars to view Tanduao village, where armed Filipinos from Sulu are holed up near Lahad Datu, during his visit on Tuesday. Followers of the sultan of Sulu who crossed to the Malaysian state of Sabah this month, have said they are reclaiming the area as their ancestral territory, the sultan said on Sunday amid a tense standoff. AFP

LAHAD DATU—Malaysian security forces on Tuesday began to move in on a group of armed Filipinos holed up in a village in Sabah as the Malaysian home minister vowed never to compromise his country’s sovereignty and security.

The last 24 hours had seen an increase in police, army and naval activities within a 24-kilometer radius around the village of Tanduao in Lahad Datu town where the Filipinos were holed up, refusing to leave and claiming Sabah was their homeland.

But the security forces kept their distance of more than 500 meters from the armed group and stationed themselves near a workers’ quarters, and were keeping watch on the Filipinos who at times walk out to a well just 300 meters from their location to fetch water.

Followers of the Sulu sultan in Palawan province said they hoped the Malaysian government would heed their demand to reopen talks on the unresolved claim of the sultanate to Sabah.

They warned the Malaysians not to hurt Rajah Mudah Agbimuddin Kiram’s group or they would retaliate.

Danny Virtudazo, who claimed he was chairman of the state of Palawan, a part of the Sulu sultanate, said the sultanate’s followers had more members spread out in Sabah than the estimated 300 holed up in Tanduao.

He said several boats landed in Sabah with around 1,500 men, but the Malaysian authorities did not know where they were.

“The win-win situation is for Malaysia to agree to a conference with the Rajah Mudah (crown prince) and the Sulu sultanate. We support open negotiations,” Virtudazo said.

The armed group was reported on Sunday as having agreed to be deported, but asked for a meeting with a prominent figure before deportation.

On Monday, however, the Filipinos were reported as not leaving, having received orders from Sultan Jamalul Kiram III of Sulu to hold their ground.

It is believed that the Kirams are either pressing the sultanate of Sulu’s claim to Sabah or pressuring the Malaysian government to increase the rent it is paying for use of the territory.

Justice Secretary Leila de Lima told reporters on Tuesday that the Cabinet was talking about the standoff. “[B]ut we can’t tell you what our discussions are and the steps being undertaken by the government,” she said.

The Malaysian authorities appeared to be keeping their options open in resolving the impasse.

Home Minister Hishammuddin Hussein said Malaysia was doing everything possible to ensure that the standoff, now entering a second week, was settled without bloodshed.

But he said the government would not compromise Malaysia’s sovereignty and security.

“I hope they don’t push us,” Hishamuddin said, referring to Agbimuddin’s group.

“We have to do the right thing at the right time. And if we have to make a decision, we are on top of it,” he added.

The group, reported as numbering some 100 to 300 people, including five women, has been camping out in Tanduao since Feb. 9.

Members of the group in military fatigues are occupying a house belonging to a farmer identified as Umrah and his wife, who are suffering from gout.

Umrah and his wife were the only ones who stayed behind while 14 families fled after the Filipinos landed on Tanduao’s shores on Feb. 9.

Agbimuddin has been communicating with handphone and has been in touch with Filipino journalists.

He is believed to be waiting to meet his elder brother, Jamalul, although the sultan is said to be undergoing dialysis treatment at a hospital in Manila.

It is unclear what has happened with Agbimuddin’s demand to meet with a prominent figure, as the negotiations for his group’s surrender and deportation have dragged on.

Talk is rife among journalists camped out near the village that anything could happen in the next 48 hours.

The entrance to the village remains guarded and security personnel have spread out to strategic locations in the oil palm plantation.

Jamalul said on Monday that the group landed in Sabah unarmed. If its members are now armed, then they got the weapons in Sabah.

Former Sen. Santanina Rasul, one of the heirs of the Sultan of Sulu, on Tuesday said one of her sons was “exploring the possibility” of asking the US government for help in enforcing their clan’s claim to Sabah.

“The American government has a record of always protecting the rights of its citizens unlike our government here. My son is exploring the possibilities of how to get the Americans’ help in exerting his right to his share of inheritance,” Rasul said in an interview.

The others are her other son, Yusuf; her sister-in-law Purita Rasul-Roth; the siblings Winnie and Jeffrey Rasul-Yusah; and the siblings Shirley and Bolalika Ututalum Hedjazi.

Rasul did not say, however, how far her son had gone with exploring the possibility of asking the US government for help in asserting her clan’s claim to Sabah.—Reports from Gil C. Cabacungan and Christine O. Avendaño in Manila; Redempto Anda, Inquirer Southern Luzon; and The Star/Asia News Network