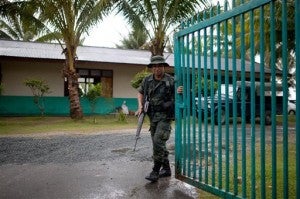 In this photo taken on Sunday, Feb. 17, 2013, a policeman closes a gate of their base at a village of Sahabat 16, near Lahad Datu, Sabab, Malaysia. Farmers and oil palm smallholders are praying for a quick end to the standoff that is entering its second week between Malaysian security forces and an armed group from Sulu. AP PHOTO

LAHAD DATU—Farmers and oil palm smallholders are praying for a quick end to the standoff that is entering its second week between Malaysian security forces and an armed group from Sulu.

They have been unable to enter the vicinity of Kampung Tanduo at Felda Sahabat 17, some 170 kilometers from this east coast town, to harvest their oil palm and other produce, such as watermelons.

A farmer who tried to enter the tight security cordon surrounding the heavily armed men was turned back by the police early on Monday.

Police feared the food supplies he was carrying could fall into the hands of the gunmen.

The farmer, who wanted to be known only as Ghafur, said he was trying to get to his oil palm farm for his twice-a-month harvest.

He was bringing along food supplies to last him a week.

Police officials advised farmers not to enter the cordoned-off area around Kampung Tanduo, where the so-called Royal Sulu Sultanate Army had raised yellow flags with a lion insignia outside a surau (prayer house).

Interviewed by the Philippines’ media, group leader Rajah Mudah Agbimuddin Kiram said they were in possession of all kinds of weapons.

The five women who came with them were in charge of preparing meals.

The group, from the Tausug and Badjao communities of Jolo, Basilan and Tawi Tawi, had been landing in batches since Feb 9.

Malaysian security forces cordoned off the area on Feb 12.

The 15 families at Kampung Tanduo have fled the area, leaving their farms unattended.

Most of them are staying with relatives and friends at the nearby Tanjung Labian settlement.

He said the situation at Felda Sahabat 17 was under control and security forces were keeping a close eye on the Filipino group.

Hishammuddin added that there had not been any untoward incident among the armed men, security forces and the villagers in the area.

“We want to avoid any bloodshed as we believe the matter can be resolved peacefully,” he told reporters at Paloh MCA Chinese New Year open house at SJK(C) Paloh on Monday.

Hishammuddin added that the security forces were in the midst of deporting the men back to their country of origin.

Hishammuddin reiterated that the men were neither militants nor belonged to any terrorist organization.

“The group’s presence is not a threat to Sabah or Malaysian security and our police have things under control,” he said.