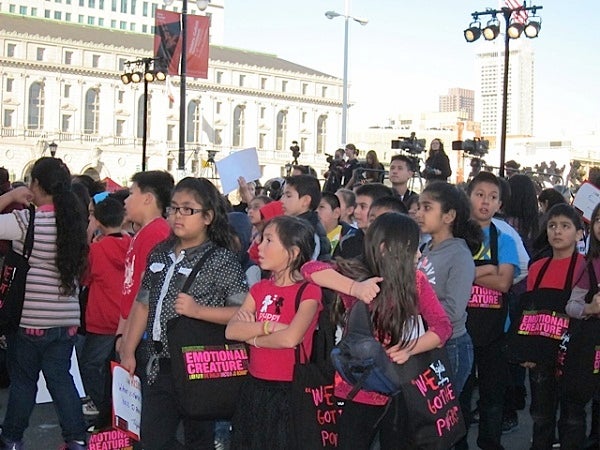 SAN FRANCISCO—Filipino women struck a strong presence among more than a thousand Valentine’s Day crowd of mostly women and girls of various ethnicities, who danced “flash-mob” style in front of City Hall to demand an end to violence against women. 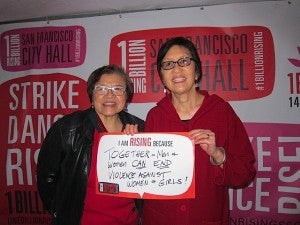 Leni Marin and Debbie Lee of Futures without Violence, a national organization dedicated to ending violence against women and girls

The event held in 190 places around the world called for a billion women to walk away from their homes, businesses and jobs and dance in a show of collective strength against assaults on women and girls and for gender equality.

“When I was 22, I didn’t know I could leave my abusive marriage,” said Marily Mondejar, president of Filipina Women’s Network (FWN), one of the organizers of the San Francisco event and a speaker in the program. It took me years before I got the courage to tell someone and ask for help.”

Mondejar also declared: “I will dance tonight in memory of Claire Joyce Tempongko, who was murdered in front of her two children, and other Filipina victims of domestic violence, and I will keep on dancing until all women and children in San Francisco are free of violence.”

Mariquit Palabyab, a teacher at Rosa Parks Elementary School and member of Filipina Womenās Network, is a survivor of sexual assault. One in three women and girls (about one billion) are subject to violence at some point in their life

There was palpable excitement in the crowd, dressed mostly in red and black, as it started gathering on Polk Street, in front of City Hall as early as 3 p.m. for 4 p.m. event, in the unseasonably warm winter afternoon. A DJ played lively music to warm up people for the later flash mob dance.

A large group of Filipino students, both girls and boys, came marching in just before the program started, waving flags of their organizations–Samahan ng Kababaihan, Migrante of Northern California.

A Filipina Women’s Network booth gave away free bags and umbrellas, sold tee shirts, and asked people to fill out a small card saying “I Am Rising Because…”.

Mariquit Palabyab, a 24-year-old teacher at Rosa Parks Elementary School saw an uncle perform at a “Vagina Monologues” performance and decided to join FWN. “One out of three women and girls around the world experiences  violence.  I am one of three.  I was a victim of sexual assault as a girl and as a woman,“ Palabyab explained. 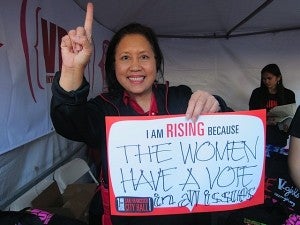 “It is important for everyone to know how much violence is going on their communities so they can start doing something about it,” said Jayann Leyson of Fil-Am for Progress, a group that supports Filipino candidates for elective positions.

Leni Marin, senior vice President of Futures Without Violence, said the event underscored “the urgent need for us to call on our representatives to urge Speaker John Boehner and Majority Leader Eric Cantor to see to it that Congress passes an inclusive Violence Against Women Act (VAWA) without further delay.”

Domestic violence is a big problem in the Filipino community, “but many of us are still silent about it,” said Elena Mangahas, chair of FWN and a community organizer in Stockton. 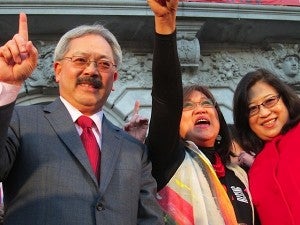 According to the Asian Pacific Islander Institute on Domestic Violence, seven domestic violence related homicides were reported in 2000 in Hawaii and five of the seven women killed were of Filipino descent, a disproportionately high rate given that Filipinos represent only 12.3% of the total population of Hawaii.

But not only women spoke out at the rally. Al Perez, a member of the San Francisco Entertainment Commission, and president of Fil- Am Arts Exposition called on men to  get involved in the movement to stop violence against women: “Women are our moms, sisters, nieces, neighbors.  We have to break the cycle of violence that affects us all, men and women.”

One Billion Rising was initiated by Eve Ensler, a playwright and activist known for her celebrated play “The Vagina Monologues,” to protest domestic abuse, gang rape, female genital mutilation, and war.  She told the UK’s Guardian she has been most amazed by actions against sex trafficking in Mexico and women’s mass actions in the Philippines.

That 50 cities in Italy began preparing events took Ensler by surprise. “That was a real turning point for me,” she said.  In the UK parliament will be asked to vote for sex and relationship education to be part of school curriculum to counter growing bullying and abuse against girls in schools.

As the San Francisco program ended and dusk descended, the flash mob dancers moved with more vigor and excitement, knowing that they have joined their voices with people in nearly 200 places around the world to call for an end to violence against women and girls.

Read Next
Malnutrition hits ‘Pablo’ victims–UN
EDITORS' PICK
A laptop that maximizes your WiFi so you can maximize your productivity
Why Tagle is a leading papal contender
In Borongan, nuns play hoops (not mahjong)
Powered by style, innovation and passion
House energy committee chair Arroyo bats for cheap electricity
KWF has no power to ban, censor written works – Lagman
MOST READ
Why Tagle is a leading papal contender
Arjo Atayde reveals proposal to Maine Mendoza was ‘more than a year’ in the making
My neighbor FVR: From soldier to president
Gilas gets solid core with Clarkson, Sotto planing in
Don't miss out on the latest news and information.