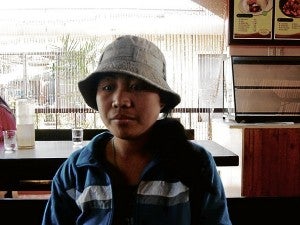 NAGA CITY—War-weary and exhausted from a long journey, an overseas Filipino worker recently narrated how creative means of communication allowed her and four other Filipino domestics to escape the fighting  in their neighborhood in Syria and make their way home.

Annie B. Belbes, 26, arrived in her hometown Pasacao, Camarines Sur early this month after she was reported last December to have frantically texted her mother here to help get local officials and politicians to speed up her repatriation.

Trapped in a neighborhood in Homs as fighting raged and “bullets rained,” she was finally rescued on Dec. 10.  She stayed at the Philippine embassy in Damascus until she was repatriated on Jan. 30, finally making it home on Feb. 1.

Annie, who worked as a domestic worker in a wealthy Arab household, said prohibitions on easy communication with the Philippine Embassy and among Filipino domestic helpers themselves made it difficult to leave.

Her own cell phone was confiscated during her first five months on the job by her employer, who paid her only $150 a month. She was also prohibited from talking freely with other Filipino domestics on the block.

Eventually, Annie and the other Filipinos devised creative ways of staying in touch and passing on information.

According to Annie, they would write letters, wrap them in plastic bags with stone weights and throw them to each other from rooftops.

Sometimes they would use sign language, tracing big letters  and numbers in the air.

There was also a common garbage bin on the street which they used as a drop-off point for notes to each other.

Through the use of these different means of communication, the Filipino girls in the neighborhood of Sad Bin Oubada Street, Insha’at, Homs, shared information that helped them plan their escape.

“We were able to connect and update each other until we were all finally rescued,” Annie said in a mix of Bicolano and Filipino.

The four others she identified were only through their first names: Zeny, Vivian, Marie and Rita.

Annie said that when she finally got her phone back, she was able to contact her mother, who sent her the telephone number of the Philippine Embassy in Damascus. She shared the number with the other Filipinos in the neighborhood.

Annie became the contact for the four other girls.

“Our employers prohibited us from communicating with each other. Zeny was on the other (side of the) building, but we could not talk to each other,” she said.

They found ways. Annie and Zeny would sneak out for a few minutes very early in the morning, go up to their respective sides of the rooftop while their employers were still asleep, and toss plastic-wrapped letters with stone weights at each other. This way, Annie learned Zeny was working from 7 a.m. to 2 p.m. in the house, and then worked in a restaurant owned by her employer, from 2 p.m. to 2 a.m.

Zeny was able to tell Annie that her cell phone had been smashed by her employer to prevent her from communicating with her family and friends. When Annie replied that she knew another Filipino who could buy a new phone for her, Zeny enclosed money in an envelope and tossed it to Annie.

Another Filipino in the neighborhood, Vivian, was one of the few Filipinos Annie was allowed to meet once in a while. Their employers allowed them to go out together to run errands and throw out the garbage. So they would not be caught tarrying or talking too long, Annie and Vivian often left letters for each other near a garbage bin shared by households in the vicinity.

“We had to find the letters near the garbage bin before they were picked up [by the garbage truck],” laughed Annie.

Vivian was able to buy a cell phone for Zeny. Communication became easier. (About two months later, Annie got a call from Zeny informing her that she had escaped to Beirut in neighboring Lebanon.)

Marie, on the other hand, did not work in the same building but instead stayed across the street in a two-story house. Annie communicated with Marie using sign language. Standing on the balcony, Annie wrote in the air indicating in big strokes the telephone number of the Philippine Embassy.

And lastly, Annie kept in touch with Rita, who worked for a friend of Annie’s employer. The two exchanged information every time Rita came to deliver food to her employer.

Annie said the Philippine Embassy had called her up just before the violence escalated but she was not ready to leave. Her employer had not given her permission and she had yet to collect her salary for several months.

But she became anxious when the street rallies became bigger and violence became almost a daily occurrence, escalating quickly into a civil war.

She said the rebels were able to occupy the Homs neighborhood where she was staying. Many families were fleeing the area.

On Feb. 5, 2012, Syrian government forces raided the Homs neighborhood, attacked the rebels, drove them away. They took control of the neighborhood by Feb. 13.

Annie said it became very dangerous to go out on the streets because of snipers. Those that attempted to go out waved white pieces or cloth or handkerchiefs to indicate they were not combatants.

The Filipino girls on the block kept up their correspondence. “We were able to connect and update each other until we were all finally rescued last year,” Annie retold in a mix of Bicolano and Filipino.

Annie sent text messages to her mother, telling of her

Her own communication with the Philippine Embassy was choppy. It was only on Dec. 2 when the Embassy was able to reestablish contact with Annie and pick her up.

Despite her harrowing experience, Annie said she still hoped she could find work overseas  so she could help her family.