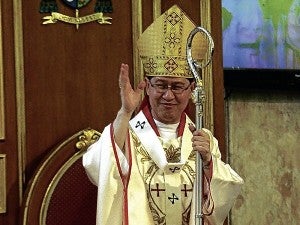 MANILA, Philippines—One of the most highly respected Vatican analysts in Italy, who had been critical of Manila Archbishop Luis Antonio Cardinal Tagle, now believes the cardinal is the only viable Third World candidate for the papal throne.

Italian journalist Sandro Magister, who writes for the magazine L’Espresso, said there seems to be no other prominent churchman from the Third World, except for Tagle, who is “capable of attracting votes” in the coming conclave that would elect Pope Benedict XVI’s successor.

He added that, with the Pope’s historic decision to abdicate due to the complications of old age, Tagle’s youth (he is 56) “will no longer be an obstacle to being elected Pope.”

“If from Latin America and Africa, where indeed the majority of the world’s Catholics live, there do not seem to emerge prominent personalities capable of attracting votes, the same is not true of Asia,” Magister said. “On this continent, soon to become the new axis of the world, the Catholic Church also is wagering its future.”

“In the Philippines… there shines a young and cultured cardinal, Archbishop of Manila Luis Antonio Tagle, the focus of growing attention,” Magister said in his article, “Who Will Take Up the Keys of Peter,” published on his website.

Magister, who espouses right-wing views, said that despite Tagle’s ties to the so-called “Bologna School” of progressive academicians, the cardinal’s “balance of vision” and “doctrinal correctness” had impressed even Pope Benedict.

“As a theologian and Church historian, Tagle was one of the authors of the monumental history of Vatican Council II published by the progressive ‘school of Bologna,’” Magister said.

“But as a pastor, he has demonstrated a balance of vision and a doctrinal correctness that Benedict XVI himself has highly appreciated. Especially striking is the style with which the bishop acts, living simply and mingling among the humblest people, with a great passion for mission and for charity,” he added.

Being young no obstacle

Magister downplayed Tagle’s youth, often cited as a reason why Tagle’s chances of getting elected are slim.

“One of his limitations could be the fact that he is 56, one year younger than the age at which Pope Wojtyla (Pope John Paul II) was elected. But here the novelty of Benedict XVI’s resignation again comes into play. After this action of his, youth will no longer be an obstacle to being elected Pope,” Magister said.

Magister had been critical of Tagle in his previous articles due to the cardinal’s ties to the “Bologna school,” which produced a controversial history of the Second Vatican Council that conservatives criticized for supposedly providing an overly progressive interpretation of the council.

After it was announced that Tagle was the new Archbishop of Manila, Magister revealed that Tagle’s ties to the “Bologna school” were not mentioned in his file that was submitted to the cardinals and bishops, who vetted Tagle’s record before his appointment as Archbishop.

This revelation was seen by some Church observers as one of the possible reasons why Tagle was not immediately named a cardinal when the Pope called for a consistory in February 2012.

Raised to the purple

When Benedict finally made Tagle a cardinal in November, Magister noted that Tagle was raised to the purple even after a Vatican prelate had criticized the chapter he wrote in the controversial “History of Vatican Council II.”

Magister noted that Archbishop Agostino Marchetto, in a book published by the Vatican, criticized the chapter Tagle wrote as “a rich and even comprehensive study, but unbalanced,” written in “journalistic language” and here and there “lacking the objectivity required of the true historian.”

“Marchetto’s criticisms nonetheless did not prevent Tagle, Bishop of Imus since 2001, from becoming Archbishop of Manila in 2011 and now cardinal,” Magister said.

Magister’s views on Tagle’s chances for the papacy drew reactions from other Church observers.

In a post titled “A Pope from the Philippines?” on the website of the conservative American magazine National Review, writer Michael Potemra said: “Sandro Magister is one of the most highly respected Vaticanisti (Vatican experts) in Italy, so it’s interesting that he thinks the young Filipino cardinal, Luis Antonio Tagle, has a serious chance.”

In a 2006 review of Magister’s website, the American magazine on geopolitics Foreign Policy dubbed Magister as “The Pope’s Prognosticator.”

“Among the most reliable and revered Vaticanisti is Sandro Magister, who covers the Vatican for L’Espresso, an influential Italian newsweekly magazine with more than 600,000 readers. Magister is well-regarded for both his acuity and his prolificacy,” the magazine said.

Across the world, in Brazil,  some analysts said the Church needed a younger, more modern and open-minded Pope who could halt the exodus of the faithful in Latin America, home to half of the world’s Catholics.

Brazil has the world’s largest Roman Catholic population—at 125 million faithful—but the country’s leftist tilt has left many feeling alienated from a church seen as overly wealthy and detached from modern life.

Brazil’s Catholics wonder who will be tasked with leading the world’s 1.1 billion Catholics, many of whom were appalled by recent pedophile and corruption scandals and shocked by the surprise resignation of  Benedict.

“It does not matter whether the next Pope is Brazilian [or] Filipino, although it will be difficult to get a non-European,” said Franciscan friar and writer Frei Betto, a friend of Cuba’s famed communist revolutionary Fidel Castro.

“I want a man open to dialogue with the modern world, to interreligious dialogue,” Betto said. “The Catholic Church maintains medieval practices. It did not enter modernity and is not comfortable with the digital world.”

Cardinal Claudio Hummes, emeritus Archbishop of Sao Paulo, stressed the need for a Pope younger than the 85-year-old Benedict XVI. Around 65 “would be a good age,” he said. With a report from AFP