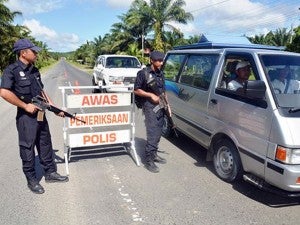 Malaysian policemen check a vehicle along the main road near Lahad Datu in eastern Sabah Thursday. Malaysian security forces in Borneo surrounded armed intruders believed to be from Mindanao and sought to persuade them to leave peacefully. AP/BERNAMA NEWS AGENCY

CENDERAWASIH, Lahad Datu, Sabah—The standoff continues between Malaysian authorities and an armed group of 100 Filipinos claiming to be members of the royal armed forces of the Sultanate of Sulu, authorities said.

The standoff with the armed men from Mindanao has sparked one of the biggest security scares in recent years in eastern Sabah state, which is less than an hour by speedboat from the southern Philippine provinces.

The armed group is forcing out villagers from Kampung Tanduao, demanding that they should not be expelled from Sabah, an area that the Philippines, on behalf of the heirs of the Sultanate of Sulu, has been trying to reclaim from Malaysia.

Home Minister Hishammuddin Hussein told reporters Thursday the gunmen had been cornered by security forces near the small coastal town of Lahad Datu.

The area was once controlled by the former Islamic sultanate of Sulu and has a history of incursions by armed Filipino Muslim groups.

He said security forces were in control and negotiating with the group, some of whom were armed with an assortment of weapons.

Malaysia’s national police chief Ismail Omar was quoted as saying the militants had declared themselves followers of “a descendant of the Sultan of Sulu.”

Ismail, quoted on the website of The Star newspaper, said the group demanded to be recognized as the “Royal Sulu Sultanate Army” and insisted that as subjects of the sultanate, they should be allowed to remain in Sabah.

“They have made known their demands while we have told them that they need to leave the country,” the police chief was quoted as saying, adding that negotiations with the group were still under way.

The demands were made during negotiations over the past 48 hours with emissaries who had asked the group to surrender and leave the area peacefully.

The Star said that the emissaries were given until noon Friday to resolve the standoff but the gunmen insisted they would only leave the village if their demands are met.

They had also purportedly raised the Philippines flag in the area. 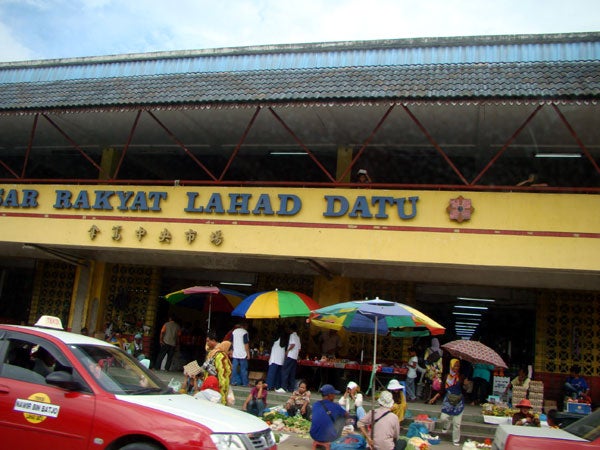 People shop in a market in Lahad Datu in Sabah. Contributed photo by Orlando Maliwanag

According to local villagers, one group of gunmen had arrived in three boats mounted with machine guns and landed in Silabukan while another landed in Sungei Merah close to Kampung Tanduao last week.

Police were then notified about the presence of the gunmen.

Some villagers had also claimed that one group of about 30 gunmen armed with M16 rifles had entered Kampung Tanduao in Felda Sahabat 20 scheme and converged at the home of a man known as Ahmad Bom or Mat Bomb.

The villagers, who declined to give their names for fear of reprisal, said that most of the gunmen were in military fatigues while others were in robes when they entered Kampung Tanduao.

According to them, Ahmad was arrested by the police in the early 1990s for allegedly attempting to throw a fish bomb at the Felda office here after failing to settle a land dispute, thus earning him the nickname.

He was also accused of being involved in fish bombing but was never charged.

The villagers claimed that Ahmad’s son had gone to Bongoa in the nearby province of Tawi-Tawi in Mindanao recently to seek help from the armed men to claim back his family’s ancestral land within the Felda Sahabat scheme.

The Sulu sultanate, first founded in the 1400s, was once a regional power center, controlling islands in the Muslim southern Philippines and parts of Borneo including Sabah until its demise a century ago.

Much of the eastern part of Sabah is being claimed by the Philippines as part of the Sultanate of Sulu that was leased to the British North Borneo Company in 1878. Great Britain transferred Sabah to Malaysia in 1963, which according to the Sultanate of Sulu was a violation of the Sabah Lease of 1878.

Philippine Department of Foreign Affairs spokesman Raul Hernandez has said Manila was in touch with Malaysia over the case. With INQUIRER.net and Associated Press