Military officials from Germany, Canada in Manila for talks with DND, AFP 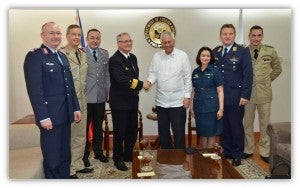 MANILA, Philippines—Military officials from Germany and Canada are in Manila this week to hold defense talks with officials of the Department of National Defense and the Armed Forces of the Philippines, amid the country’s efforts to build its defense posture in the disputed West Philippine Sea.

A delegation from the German Federal Ministry of Defense arrived on Wednesday for a three-day stay that would revisit the European nation’s ties defense ties with the Philippines, the Department of Foreign Affairs said.

The delegation, including three other officials from the German defense ministry’s International Security Policy and Bilateral Relations, would also meet with defense officials for bilateral discussions on training, disaster management and capacity-building, the DFA said.

Rear Admiral William Truelove, commander of the Canadian military’s Maritime Forces in the Pacific, is meanwhile, set to meet with Armed Forces of the Philippines Chief of Staff Emmanuel Bautista “to discuss issues of mutual interest” at the military headquarters in Camp Aguinaldo, Quezon City.

Her Majesty’s Canadian Ship (HMCS) Regina, a Halifax-class frigate, is also docked in Manila until Saturday on a goodwill visit to hold charity and sports events here.

Back in Manila 16 years since its last visit, the Regina welcomed some 50 children from an underprivileged community in Tondo, Manila, for a special ship tour.

The Regina is in the Philippines following its deployment in support of a Combined Task Force 150, a multilateral maritime collaboration among 27 nations on patrol and counter-terror operations in the Arabian Sea, the Gulf of Oman and the Indian Ocean.