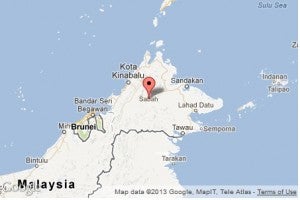 At 1:37 a.m. on Tuesday, about 1,000 people, mostly armed men and a handful of women, boarded speedboats on Simunul Island in Tawi-Tawi and left for Lahad Datu, a coastal area in Sabah in northern Borneo.

For the group led by Radjah Mudah Ajbimuddin Kiram, there was nothing unusual about the trip, as they were just going home.

“We want to live in our place. Sabah is our territory, as it is part of the ancestral domain of the Sultanate of Sulu and North Borneo,” Radjah Mudah said.

“One more thing, it’s as if we were not Filipinos,” he said. “The President of the Philippines pays no attention to us.”

Radjah Mudah is one of the three leaders of the Kiram family, heirs of the Sultanate of Sulu that owns Sabah.

But taking possession of Sabah is not as easy as taking boats and landing on the shore.

Malaysian security forces blocked their landing and demanded they surrender their weapons.

“They surrounded us—me and my group of civilians and royal security forces—and, of course, they were armed,” Radjah Mudah told the Inquirer by phone Thursday.

“But there was no fighting. We talked. We have an open line to a high Malaysian official and he talked to us, referring to me as ‘Your Excellency, Your Royal Highness,’” Radjah Mudah said.

But he described the situation as a “standstill” and an “open negotiation status.” He said he was surrounded by troops from his Royal Security Forces of the Sultanate of Sulu.

The Malaysian government was not so sure what the group of Radjah Mudah was.

Reports from Kuala Lumpur on Thursday said Malaysian security forces had surrounded about 100 armed men believed to be from a breakaway rebel faction in the southern Philippines.

But a ranking intelligence official from the Armed Forces of the Philippines said the “foreigners” arrested in Sabah were not militants or terrorists from the Philippines but descendants of the Sultan of Sulu who had been monitored to have sailed for Sabah last week.

The official requested anonymity, as he was not authorized to talk to reporters about the matter, which he said was within the purview of foreign policy.

The Department of Foreign Affairs (DFA), however, had no clear information on what was going on in Sabah.

DFA spokesman Raul Hernandez told reporters that Philippine officials were working with Malaysian authorities to “get to the bottom of the incident.”

The military intelligence official said the “foreigners” were neither armed nor members of the Abu Sayyaf as reported by Malaysian media.

In fact, the official said, the group was composed of people who regularly traveled to Sabah “to trade.”

The official said the Philippine military had already spoken with the Malaysian military to discuss the reported arrest of the supposedly armed men.

“We’ve been talking regularly and we have discussed this supposed group of armed men. So far, there are no problems,” the official said in Filipino.

The officials said he believed the reports were “exaggerated,” following intelligence reports that the group of descendants of the Sultan of Sulu had a meeting recently and decided to “continue their family’s claim to Sabah.”

“Apparently, in the meeting, the followers or descendants were told that those who would join the journey to Sabah would be given a portion of land. That is why there was a large group that went there,” the official said.

The official said the group left for Sabah last week.

Asked if his group was seeking sanctuary in Malaysia, Radjah Mudah said no. Sabah, he said, belongs to the Sultanate of Sulu and Malaysia is simply leasing it at 5,300 Malaysian ringgit, or P77,000, a year.

Abraham Julpa Idjirani, secretary general and national spokesperson of the Sultanate of Sulu, said the decision was part of a royal decree issued by Sultan Jamalul Kiram III in Zamboanga City a month and a half ago.

Idjirani said the sultanate had a 100,000-strong security force. The 15,000-strong Royal Security Force was established in 1999, he said.

The administration of former President Gloria Macapagal-Arroyo recognized the Royal Security Force as partners in peace and development, he said.—With a report from Tarra Quismundo