Filipinos abroad hire Cupids to serenade loved ones back home 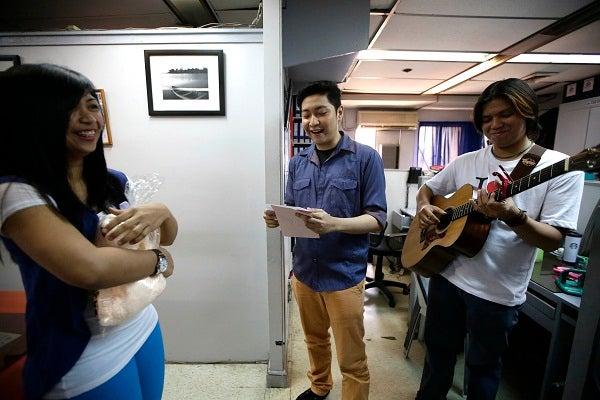 Rose Natividad, left, reacts as a singer, hired by her partner who is working for a cruise liner overseas, serenades her as a surprised Valentine’s Day gift to her at her office in Manila, Philippines Thursday Feb. 14, 2013. The unique surprise serenade service, which includes love songs, a cuddly teddy bear, and a video recording of the romance-by-proxy event that is shipped to the client abroad, is played out in restaurants, offices and homes across the Philippines on Valentine’s Day. AP/Bullit Marquez

MANILA, Philippines — Angelica Nino, a 22-year-old manager of a Manila restaurant, was preparing to assign shifts to her crew last week when she got a big surprise from her Filipino boyfriend who has been in Italy for a year on business.

To mark their first anniversary as a couple and as an early Valentine’s Day gift, he sent over a singer and a guitar player to serenade her and read out his love letter.

This scene will be played out Thursday in restaurants, offices and homes across the Philippines on Valentine’s Day.

With nearly 10 percent of the country’s 94 million people working abroad, clearly there was room for someone to play Cupid between long-distance lovers. And then was born a unique surprise serenade service, which includes love songs, a cuddly teddy and a video recording of the romance-by-proxy event that is shipped to the client abroad. To immortalize their love, the video is also posted on YouTube.

At the Yoshinoya restaurant, a video camera recorded the teary-eyed Nino listening to the love songs by the rental Cupids while hugging the teddy bear gift. Smiling co-workers — who were in on the surprise — and guests watched as Thor, a professional singer, performed.

The unique service was started by in 2010 by Jason dela Rosa, a former recording studio producer who said it is the first and only professional surprise serenade service in the country. The bulk of his clients are homesick and love struck Filipinos overseas who want to send their love to spouses, girlfriends and boyfriends from thousands of miles away.

“So even if you are overseas, and you send a serenade to your loved ones in the Philippines, you will get to experience what they experienced via the video,” said Jason dela Rosa, a former recording studio producer who started the serenade service in 2010.

It is not unlike having flowers delivered to your loved one, but with the added zing of a song.

He said he and his business partner wanted to give the “singing telegram” that was popular in the U.S. a more Filipino character, so they called their company Harana, or serenade in the local Tagalog language.

Harana is a dying Philippine courtship tradition in which a boy courting a girl goes to her house in the evening with a guitar player and singer in tow. They would sing love songs until the girl being wooed looks out the window or invites them in to meet her parents.

“Harana’s effect is different because harana is such a cultural thing for us, but we try to make it modern, with modern songs,” dela Rosa said.

Instead of just sending a plain message, “there is romance, there is a lot effort put into the event organizing, and the most we wanted to do is to record everything on video,” he added.

When the company was started, dela Rosa said, no one else in the world offered such a service, though similar services are available today in the U.S., Bolivia and Australia. But its popularity in the Philippines is more telling because no other countries have such a high percentage of people who work abroad, mostly in service, medical and shipping industries.

Gloria Guevara, a 57-year-old accountant whose seafarer husband Eduardo is sailing in South America, said she was touched when she was serenaded on their wedding anniversary in her office in December. Her officemates were cheering, and some, like her, became misty-eyed.

“It really came as a surprise,” Guevara said. “Often he would send flowers or send money to my daughter for our lunch out, but for this anniversary it was a little different.”

She said Filipino families with members abroad have “so many things we miss out on, but you can try to make up for it by such gestures.”

The modern take on the traditional serenade does not come cheap. The fee for a basic package — including two to three songs by a professional singer, a personal message read with background guitar music, a teddy bear, and a CD containing a video and photos of the event — is 7,000 pesos ($170), which is equivalent to a quarter of the monthly wages of a restaurant manager like Nino. Dela Rosa said the price could go higher if the client requests a top-ranked singer or other extras.

The service is nationwide, tapping a network of some 140 singers and guitar players in different cities.

Love transcends the distance, “and Harana makes it possible,” says the company’s website.

“I salute men who still practice Harana, because it’s classic and it’s very flattering for a woman,” she said.