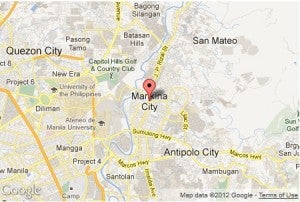 MANILA, Philippines—A Chinese national was arrested and an elderly man was taken into custody by agents of the National Bureau of Investigation in separate operations for alleged possession of shabu estimated to be worth P1.5 million in Marikina City, the head of the agency’s Counter Intelligence Division said on Wednesday.

Segunial said Lim was arrested after he alighted from his car at a gasoline station in Marikina on Saturday afternoon.

“He tried to retrace his steps and returned to his car when he noticed the approaching agents,” Segunial explained.

He said the suspect was carrying a white paper bag containing the illegal substance, weighing at least 250 grams, which he was supposed to pass on to a courier, when he was arrested.

He said a drug possession complaint has been filed against Lim with the City Prosecutor’s Office in Manila.

No bail was recommended by the assistant city prosecutor who found probable cause to indict him.

Segunial said the arrest of Lim led to the raid of a house in barangay (village) Concepcion, also in Marikina City, the supposed safe house of Lim’s supplier known as David Chua.

He said that NBI agents, armed with a warrant issued by a Manila City Court, searched the house for the illegal drugs and found another 250 grams.

He said a “packing vacuum machine and other paraphernalia” were found inside the house.

“Based on the evidence we gathered from the house, the repacking operation in that house could be a big one,’’ the NBI agent said.

He said a 76-year-old man staying in the house was taken into custody.

“We are now in the process of interviewing him and asking him what he knows about Chua who, he claimed, is his son,’’ Segunial explained.

Segunial said police have started a manhunt for Chua.