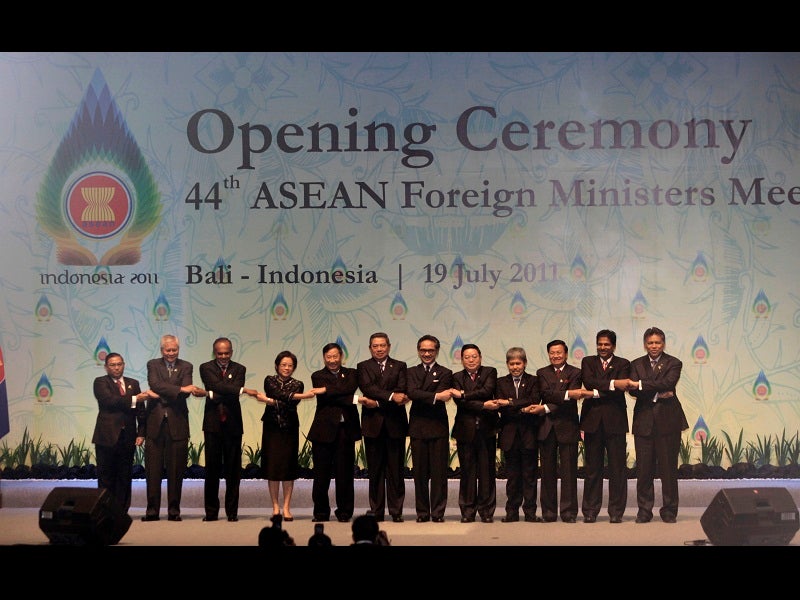 Foreign Ministers and delegate from the 10-member Asean hold hands during the opening ceremony of the Asean Ministerial meeting in Nusa Dua, Bali, Indonesia, Tuesday. AP

NUSA DUA—Asean foreign ministers voiced “serious concern” Tuesday as the war of words between China and the Philippines over disputed islands in the West Philippine Sea escalates.

There have been several recent incidents between claimants, particularly involving China, in the West Philippine Sea (also known as South China Sea), which is believed to be rich in oil and gas and is a crucial route for global shipping trade.

It includes Chinese forces allegedly opening fire on Filipino fishermen, shadowing an oil exploration vessel employed by a Philippine firm and putting up structures in areas claimed by the Philippines.

The tensions look set to overshadow five days of meetings in Bali culminating Saturday in the Asean Regional Forum security dialogue, which brings in China, Japan and the United States.

In an end-of-meeting statement, the Association of Southeast Asian Nations (Asean) foreign ministers said they had noted the recent tensions with alarm.

“We discussed in depth the recent developments in the South China Sea and expressed serious concern over the recent incidents,” they said, calling on claimants to exercise “self-restraint”.

Taiwan, China and Asean members Philippines, Vietnam, Brunei and Malaysia have overlapping claims to parts of the West Philippine Sea.

The United States has defense pacts with Taiwan and the Philippines and says it has a “national interest” in the free movement of shipping.

Adding to the unease, China’s embassy in the Philippines warned that plans by five Filipino lawmakers to visit the disputed Spratly archipelago—in a trip not sanctioned by the Philippine government—could damage bilateral ties.

“It… serves no purpose but to undermine peace and stability in the region and sabotage the China-Philippines relationship,” the embassy said of Wednesday’s scheduled visit to what Manila calls the the West Philippine Sea.

“We need to finalize those long overdue guidelines because we need to get moving to the next phase,” Yudhoyono said in a keynote speech to the meeting of foreign ministers.

“We need to send a strong signal to the world that the future of the South China Sea is a predictable, manageable and optimistic one.”

The Indonesian leader noted that it took Asean and China 10 years to agree on a declaration for a code of conduct, and they have been discussing the guidelines to implement the code for another nine years without agreement.

“Things do not necessarily have to be this slow,” Yudhoyono said.

Asean Secretary General Surin Pitsuwan said Asian countries had to “send the right signal to the world” that they can deal with sensitive territorial disputes and not just trade.

Frictions have intensified lately, with the Philippines and Vietnam protesting over what they say are increasingly forceful Chinese actions in the West Philippine Sea.

Vietnam voiced anger after a Chinese vessel cut the exploration cables of a Vietnamese survey ship in May, and Beijing condemned US-Vietnam naval exercises that began last week off Vietnam’s coast.

China staged its own military exercises in the West Philippine Sea in June and announced plans to boost its offshore maritime patrol force.

Not to be left out, Taiwan has said it is considering deploying missile boats in the waters and tanks on disputed islands.

US Secretary of State State Hillary Clinton and Chinese Foreign Minister Yang Jiechi will be among those attending the ASEAN Regional Forum on Saturday.