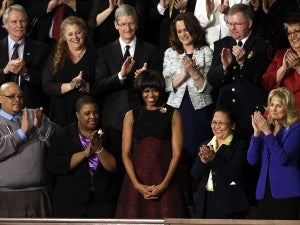 Filipino nurse Menchu Sanchez (2nd from right, front row) is flanked by US First Lady Michelle Obama to her right and Ms Jill Biden, wife of the US Vice President, to her left minutes before President Barack Obama delivered the State of the Union address in Washington DC Tuesday before a joint session of Congress. AP PHOTO

LOS ANGELES—A Filipino nurse who led the rescue of hospitalized infants as superstorm Sandy battered New York last year was hailed by President Obama as a role model in his State of the Union Address Tuesday (Wednesday in Manila) in Washington DC.

“We should follow the example of a New York City nurse named Menchu Sanchez. When Hurricane Sandy plunged her hospital into darkness, she wasn’t thinking about how her own home was faring,” Obama said in his address before a joint session of Congress. “Her mind was on the 20 precious newborns in her care and the rescue plan she devised that kept them all safe.”

Sanchez – a 56-year-old registered nurse who was born, raised and educated in the Philippines – had been chosen as one of the “extraordinary Americans who exemplify the themes and ideals laid out in the State of the Union Address,” the White House said.

Sanchez was invited to join the First Lady in her viewing box. She sat between Mrs. Obama and the vice president’s wife, Jill Biden.

When the hurricane cut power at NYU Langone Medical Center, Sanchez created a plan to transport 20 at-risk infants to intensive care units around the city, according to a White House blog site.

“She organized the nurses and doctors to carefully carry the babies down eight flights of stairs with only cell phones to light the way,” the blog site said. “Even as Menchu’s own home was flooding, she thought only of protecting the babies in her care.”

In an interview with NorthJersey.com, Sanchez said that when the hurricane knocked out power to the hospital and the East River flooded the backup generators, they knew that the ventilators keeping the newborns alive would stop working. 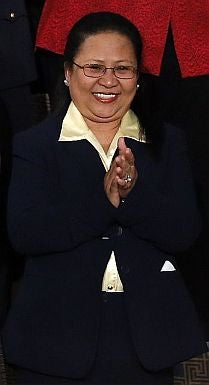 “We knew immediately we had to get the babies downstairs,” Sanchez said. “With the elevators out, we didn’t have a lot of choices.”

Hospital officials later praised Sanchez for finding a way to get the babies down safely.

“She’s the one who thought of taking the babies down in a warming pad, cradled in the arms of a single nurse to keep them warm and secure,” Kimberly S. Glassman, senior vice president for patient care services, told a nursing publication.

Migrating to the United States in the 1980s, Sanchez has worked as a nurse in New York for more than 25 years and has been at NYU Langone Medical Center since 2010. She lives in Secaucus, New Jersey with her husband and two children, both of whom are in college.

Sanchez is the second Filipino nurse honored by Obama within the past several months. Last year, nurse-turned-community activist Corazon Basa Cortes Tomalinas from La Union province was honored at the White House as a “Champion of Change.”

Tomalinas was recognized for her work to prevent youth violence in communities as part of the National Forum on Youth Violence Prevention.