Filipinos hoping Tagle will be next pope 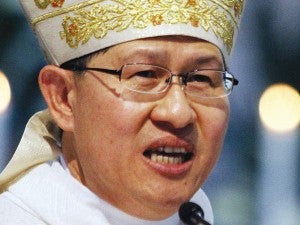 MANILA, Philippines—Bishops and all Catholics in this nation are hoping that a Filipino will be the next pope, a senior church figure said Tuesday, as he promoted the credentials of the country’s only candidate.

Heads of the Catholic Bishops Conference of the Philippines held a press conference in which they expressed sadness at Monday’s shock announcement by 85-year-old Pope Benedict XVI that he would resign because of health reasons.

One of the leaders also spoke about the desire in the Philippines for the Archbishop of Manila, Luis Antonio Tagle, who was made a cardinal last year, to succeed Benedict.

“We Filipinos would like a Filipino to be pope. Any country would be proud of that — that your own cardinal becomes pope,” said Father Francis Lucas, head of the mass media commission of the country’s Roman Catholic bishops.

“The ordinary people, they would like Tagle to be pope because he is a Filipino.”

Lucas said Tagle, 55, had many favorable qualities for a future pontiff.

“He is humble, he is meek, he is very bright, he is media-savvy, he is simple. He used to ride the bus to appointments but he kept on arriving late because of traffic,” Lucas told reporters.

The secretary-general of the Catholic Bishops Conference of the Philippines, Monsignor Joselito Asis, said there were many candidates to be the next pope from around the world, and raised the prospect of him coming from Asia.

“No one can pinpoint a dominant name so it is exciting,” he told reporters.

The Philippines is one of the most important countries in Asia for the Catholic Church. About 80 percent of the country’s 100 million people are Catholic, a legacy of the country’s former Spanish colonial rule.

Tagle also issued a statement on Tuesday in which he said Benedict’s resignation was a surprise and brought great sadness. But he made no mention of his own prospects.

“We know that the Papal ministry is not an easy task. So we thank Pope Benedict XVI… for selflessly guiding the Church these past eight years with his teaching, simplicity and gentleness,” Tagle said.

The Vatican has said it expects a new pope to be in place in time for Easter, which falls on March 31 this year, although the decision is ultimately up to the cardinals of the Catholic Church who meet in a secret conclave.