Japan plans to give patrol boats to Manila—report | Global News

Japan plans to give patrol boats to Manila—report 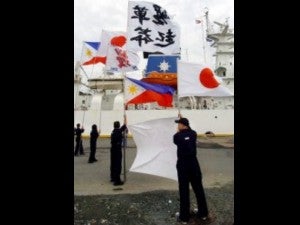 Members of Philippine Coast Guard put up flags as they welcome the training vessel “KOJIMA” of the Japan Coast Guard in Manila, 11 August 2004. AFP FILE PHOTO

The Japanese government plans to finance the deal in its fiscal 2013 budget starting in April and hopes to officially sign it early next year, the Nikkei business daily reported.

Japan will then provide the Philippines with the newly built patrol vessels, which will cost more than one billion yen ($11 million) each, the newspaper said, without specifying the number of boats on offer.

Both countries are locked in separate territorial disputes with China.

Japan’s dispute is over a group of uninhabited islands in the East China Sea known as the Senkakus in Japan and the Diaoyus in China.

The Philippines is one of several Southeast Asian countries, including Vietnam, that are rowing with China over claims to parts of the South China Sea. Two of the hotspots are the Spratly islands and Scarborough Shoal.

The Japanese coastguard also plans to train Philippine and Vietnamese personnel as part of additional efforts to boost security cooperation with Southeast Asia, the Nikkei said.

In the fiscal 2013 budget draft, 2.5 billion yen has been allotted for such expenditure, it said.

The long-running row over the islands intensified in September when Tokyo nationalised part of the chain, triggering fury in Beijing and huge anti-Japan demonstrations across China.

In the most serious high-seas incident yet, Japan last week said that a Chinese frigate locked its weapon-targeting radar on a Japanese navy vessel on January 30. China has angrily denied the charge.