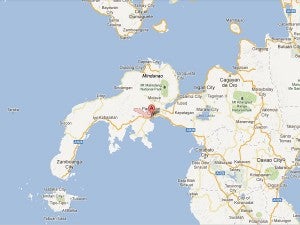 OZAMIZ CITY—The family of the 1-year-old Filipino-Canadian boy kidnapped in Pagadian City on Thursday morning credited his 17-year-old nanny for his safe return on Friday.

The boy was snatched along with his nanny at around 6:30 a.m. on Thursday after armed men barged into the family’s house on Sto. Rosario Road in Dau village.

Karen Maata, mother of the kidnapped boy, said nanny Carolyn Remetre seized an opportunity to flee when the kidnappers briefly left them unguarded in a safe house here on Friday afternoon.

Maata, who came over to fetch her son, Timothy Sokolov, and the nanny after the escape, recounted to reporters the girl’s story—how, in her determination to escape from captivity, she hugged Timothy tight, double-checked that nobody was watching them and dashed to freedom.

“She was crying and distraught and decided to go inside Gaisano Mall,” Maata said, noting that the girl did not know who to run to for help.

She said Remetre decided to sit in a corner inside Gaisano Mall while trying to compose herself and thinking of a place to go when local policeman PO1 Alex Bentero saw her crying.

Maata said that initially, the nanny refused to open up to Bentero because he was a stranger despite his being in uniform.

But she finally talked when he persisted in questioning her, she said.

Bentero then took Remetre and Timothy to the city police station, where Maata said she and the Zamboanga del Sur police were contacted about her son and the nanny’s escape.

Maata’s story, based on what Remetre had told her, slightly contradicted the details earlier released by police and military authorities on how the boy was reunited with his family.

Maj. Gen. Rainier Cruz, commander of the Army’s 1st Infantry Division based in Zamboanga del Sur, told the Inquirer late on Friday that based on reports sent out by Misamis Occidental authorities, Timothy, whose father is a Pagadian City-based Canadian businessman, and Remetre were recovered after they were released by their captors.

“The victim had already been turned over to the Zamboanga del Sur police and was being transported back to his family in Pagadian City,” Cruz said in a text message to the Inquirer.

Senior Supt. Ramon Ochotorena, Zamboanga del Sur police chief, later sent a text message to the Inquirer saying “it was still unclear” whether or not ransom had been paid but added that the nanny was undergoing debriefing.

Ochotorena would not say what the boy’s condition was but said he was to be medically examined.

Supt. Julius Munez, Pagadian City police chief, earlier told the Inquirer by phone that the boy’s parents were not around when the gunmen struck.

When the search and rescue operation did not yield good results in Pagadian City, other police units were alerted, he said.

The efforts to recover the boy and his nanny were later widened, with the participation of other police units in Zamboanga del Norte, Lanao del Norte and Misamis Occidental. Ryan Rosauro and Julie Alipala, Inquirer Mindanao