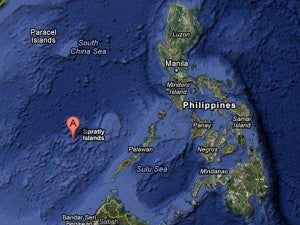 MANILA, Philippines – The Chinese Navy has concluded weeklong drills in the disputed West Philippine Sea (South China Sea), activities that caused the Philippines to raise “serious concern” with respect to efforts to settle the territorial dispute through arbitration by the United Nations.

The state-run news agency Xinhua reported over the weekend that the Chinese People’s Liberation Army’s Navy fleet finished patrols and training in the contested waters on Thursday following drills on interdiction and anti-piracy operations.

The Xinhua report also revealed that the fleet of three ships—the missile destroyer Qingdao and the missile frigates Yantai and Yancheng— patrolled the Spratly Islands (Nansha), the resource-rich island chain  claimed entirely by China as against claims to only parts of it by the Philippines, Vietnam, Malaysia, Brunei and Taiwan.

“During a patrol of the Nansha Islands and their adjacent waters, the fleet maintained a high level of combat readiness and carried out drills related to expelling ships that infringe on China’s territorial waters, as well as carried out an anti-piracy drill,” Xinhua said in a report Friday.

Xinhua said the ships also “extended New Year greetings” to Chinese military officers and soldiers deployed on Chinese-occupied parts of the Spratlys ahead of the Lunar New Year celebrations this coming week.

The report said the deployment was within the “territorial waters” of China, the boundaries of which are known to overlap with maritime boundaries of the Philippines and other countries with claims to territories in the West Philippine Sea, the name give by the Manila government to the part of the South China its claims to be part of Philippine territory.

The Chinese naval fleet started the exercises on Jan. 31 and entered through the Bashi Channel, an international sea lane between Luzon and Taiwan.

The Philippines had expressed serious concern over the new patrols and called on China anew to respect and keep off its established maritime boundaries within the disputed waters.

The country has sought UN intervention to stop Chinese incursions in its claimed parts of the South China Sea, filing an arbitration plea last month with the world body’s arbitral tribunal.

The legal action asked the UN to declare as “invalid” China’s “nine-dash line” claim, its basis for asserting ownership over all of the Spratly Islands, including those closer to the Philippine coast.

The move also sought to stop Chinese occupation and construction on smaller islands within the Philippines’ maritime boundaries.

China has said it would not participate in the proceedings, reiterating its “indisputable sovereignty” over the waters.  The Philippines is, however, confident that the process will push through as it is a compulsory procedure under the UN Convention on the Law of the Sea.