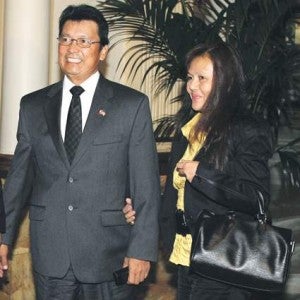 CITY OF SAN FERNANDO, Philippines—A judge in Las Vegas, Nevada, has turned down the request of the wife of Sen. Manuel “Lito” Lapid to live in the Philippines as she serves three years of probation for dollar smuggling and reporting violations, an Inquirer source said.

Last Monday’s ruling by United States Magistrate Judge Peggy Leen denied Marissa Lapid’s request to live in the Philippines while on probation, said the source who was inside the courtroom when the sentence was handed to the senator’s wife.

The sentence came more than a year after the Department of Homeland Security found $40,000 in her luggage when she entered Nevada in November 2011. She pleaded guilty in a plea bargain.

Aside from the probation that comes with travel restrictions, the sentence includes a five-month home confinement for which she was required to continue wearing an ankle bracelet that electronically tracks her location, according to reports quoting the spokesperson of Nevada US Attorney Daniel Bogden.

The source explained this “means she can’t travel and has to report to an officer of the court in a supervised release system for three consecutive years, usually once a month.”

The source declined to be named, citing future work in the Philippines.

“There is usually a fine and an additional sentence of time served or added as possible total time to serve if they fail to adhere to the terms of the probation,” the source said, without giving details.

The courtroom was filled with Filipinos when the judge handed the sentence. Senator Lapid did not reply to requests for comments.

But Marissa Lapid’s lawyer, Eliot Krieger, in an earlier report, said Marissa may be able to return to the Philippines “after five months of home confinement with the permission of the probation department.”

The reporting violations stemmed from a series of cash deposits made by Lapid in different banks in Las Vegas from January 2009 to June 2010 totaling more than $150,000.

Banks are required to submit to the federal government currency transaction reports on cash deposits that exceed $10,000.

All the deposits, plus the $40,000 confiscated from Lapid when she arrived at McCarran International Airport in Nevada on Nov. 27, 2011, were forfeited by the US government, Krieger said.

Lapid was held at an Immigration and Customs Enforcement (ICE) detention center in Las Vegas for three days after she was arrested on Jan. 15, 2012.

Lapid, a permanent resident or green card holder, declared in the US Customs and Border Protection form that she was carrying $10,000 and P10,000 (equivalent to $225), Giangregorio said in his affidavit.

After searching her luggage, ICE agents found $40,000 in a pair of socks and a cloth bag hidden in the lining, he added.

US federal law requires arriving passengers to declare any currency or monetary instrument totaling $10,000 or more. Violators are fined a maximum of $500,000 and the money recovered is confiscated by the US government. Bulk cash smuggling is also punishable by a maximum 10-year imprisonment, a source from the Department of Homeland Security said.

Court documents showed that when Lapid was questioned by customs officials about the undeclared money, she said, “I’m sorry… it’s for my house.”