Netizens to US: You break it, you fix it | Global News
Close
menu
search

Netizens to US: You break it, you fix it 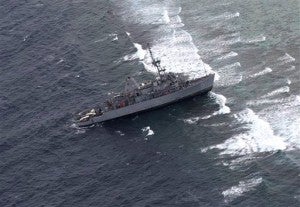 The USS Guardian, which ran aground Tubbataha Reefs is shown in this Jan. 17, 2013, photo released by the Armed Forces of the Philippines Western Command. Filipino netizens have expressed their lament over the incident, calling on the United States to make amends for the damage to corals. AP PHOTO

MANILA, Philippines—As authorities scramble to salvage a US Navy ship from the delicate Tubbataha Reefs Natural Park, Filipino netizens have expressed their lament over the incident, noting the protected area’s importance to global marine biodiversity and calling on the United States to make amends for the damage to corals.

Online users have signified their support for a petition calling on US Ambassador Harry Thomas to fund long-term rehabilitation of corals in Tubbataha, an appeal posted last week on Change.org, the world’s largest petition platform.

The petition was posted before the US Embassy announced a plan for long-term support for coral reef preservation in the country as it drew flak for the grounding of the 68-meter USS Guardian in the marine park.

“It will take over two centuries for the reef to be completely repaired and restored to its pristine condition. No amount of money or human intervention can speed that up but there are still ways in order to help Tubbataha. Let us not waste time in figuring out who to blame and why it happened,” the petition said.

The US Embassy has said the announcement made over the weekend, which allocated P4.1 million for coral reef research in the Philippines, was not a direct response to the online petition. US officials have expressed regret over the incident.

“I think they shouldn’t just pay the country. They should use their own resources and be the ones who would rehabilitate the damage!” said Audrey Tangonan, a petition supporter from Muntinlupa City.

“Because it is one of the few beautiful things that the Philippines has been proud of and has been taking care of… a careless act such as this cannot be overlooked. Justice must be served,” said Adel Sta. Maria of Quezon City.

US liability for the incident is clear and simple for Makati resident Wendy Liong: “You break it, you fix it.”

The Guardian ran aground in the marine sanctuary, a world heritage site in the Sulu Sea, on Jan. 17, as it sailed to Indonesia following a visit to the Subic Bay in Olongapo City. Stuck for some three weeks now, the minesweeper has damaged some 4,000 square meters of the reef.

Saying the vessel may no longer be used because of a heavily damaged hull, the US Navy has decided to dismantle the ship and to take it off the reef without causing further damage to the corals.

The US military considers the grounding of the $277-million Guardian a rare peacetime loss of a critical naval asset.

Anjelynmn Guanlao of Muntinlupa City called for accountability over the incident, with the US Navy yet to say whether any official aboard the Guardian at the time of the grounding would be held liable.

“Saying ‘sorry’ won’t heal our environment. Someone should be responsible. I want future generations to still experience the beauty of Tubbataha Reef,” Guanlao said on the petition’s comment thread.

Olongapo City’s Joanne Santos said long-term rehabilitation would be “the most reasonable payment” for the US “violation” of the coral reef.

“It’s a sanctuary for marine life and therefore (obviously) should be protected by all means,” Santos said.

The petition of UPMBS, a students’ environmental organization in UP Diliman, seeks US commitment to the long-term rehabilitation of the Tubbataha Reefs.

Nearly 600 supporters from around the Philippines had signed the petition as of press time.

The plan to cut up the Guardian is expected to push ahead this week, as local officials and the management of the marine park are expected to approve the salvage plan presented by US and Coast Guard officials on Tuesday.

Earlier fears were raised by marine conservation groups concerning the requirement of Smits Borneo, a floating crane, to anchor before it could operate.

Isorena said the PCG had been assured by the crane operator that the vessel would be anchored “at a considerable distance from the reefs to minimize damage.”

“They explained that they will anchor off the reef and the distance of the Smits Borneo will be quite far from the reef,” he said.

Under the plan, the USS ship Salvor will cut up the Guardian into smaller sections, beginning with the mast and the smokestack, which the Smits Borneo will lift off the water using its cranes.

Isorena said that once the plan was approved by the Tubbataha Management Board, the salvage operation would start right away and was projected to continue until the diving months of April and May.

PCG divers will make a “final assessment” of the damage once the grounded minesweeper is removed from the Philippine marine park, the PCG spokesman said.

Lt. Cmdr. Armand Balilo said that “within the week, PCG divers may check out the reefs anew to find out the extent of the damage.”

“We’re told the ship’s rudder remains stuck (on the southern atoll of Tubbataha). But there’s a chance for our divers to conduct another operation this week. But again, it all depends on the weather. We’re hoping weather will improve,” he said.

In a joint statement, the Philippine and US governments said they had agreed to continue to work closely together as the salvage operation and the investigation into the grounding continued.

“Both governments agree that preventing further damage to the reef is a top priority,” read the statement sent both by the Department of Foreign Affairs (DFA) and the US Embassy.

The PCG has initiated an “independent inquiry” into the incident through the formation of a Maritime Casualty Investigation Team.

The Philippine government said the investigation “seeks to establish the circumstances and causes of the grounding on Tubbataha Reef and to formulate safety measures to prevent a repetition of this incident.”

The two governments made the announcement following a series of meetings among officials of the DFA, Department of Transportation and Communications, Department of Justice, PCG, US Navy and US Embassy.

In a meeting at the DFA on Monday, the US ambassador “reiterated his regrets over the grounding incident” and said the United States would “provide appropriate compensation” for the damage the Guardian had caused on the reef.

The Tubbataha Management Office, which regulates mostly diving activities in the park during the summer months, said only two dive sites of the 15 identified around the Tubbataha Reefs would be closed.

“We will cordon off the area once diving season starts because we anticipate that divers will want to get as close as they can to the ship,” Isorena said.

So far, American marine biologists who were allowed to assess the damage reportedly placed the affected or damaged coral reef areas to around 4,000 sqm.

Isorena brushed aside demands raised by some conservation groups to just sink the Guardian to minimize reef damage.

“We are presenting the plan to the stakeholders. If they will not agree with the plan, we hope they can present a more viable option. We are open to all suggestions,” Isorena said.—With a report from Jerry E. Esplanada